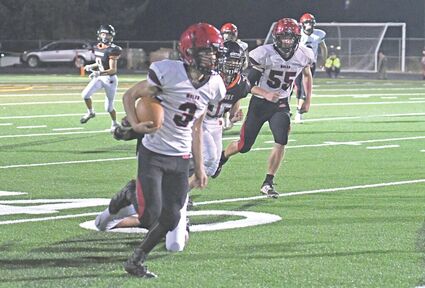 Mule Jacob Johnson beats the Kalama defense for a 98-yard touchdown on a kickoff return. Kalama won the game, however, 36-14.

Kalama led 6-0 at halftime and pulled ahead 12-0 early in the third quarter. The Mules closed the gap with a drive ending in Zakk Carlson's three-yard run; he ran the conversion to close the gap to 12-8.

Kalama then put two touchdowns on the scoreboard to lead 24-8. On the Chinook kickoff after the second score, Mule Jacob Johnson returned the kick 98 yards, cutting Kalama's lead to 24 -14. 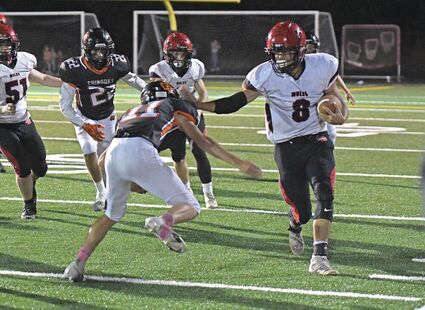 Dominic Curl gives a stiff arm to a Kalama Chinook.

That, however, was as close as the Mules would get. The Chinooks added two touchdowns in the fourth quarter to claim the victory.

The 2-5 Mules host the Stevenson Bulldogs this Friday; it will be the Mules' homecoming game, with senior night celebrated before the game.