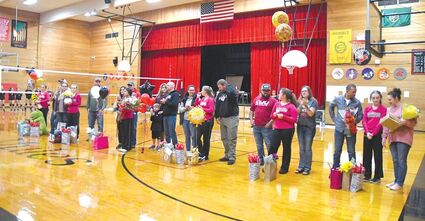 Wahkiakum Mule senior volleyball players and their parents were honored Monday before the start of their last home match.

District games begin on Saturday for the Wahkiakum Mules volleyball team, which split games this week with a win on the road and a loss at home.

"Our focus tonight was on playing together and holding steady energy as a team," Coach Kayli Hurley said. "We made strides in this area." 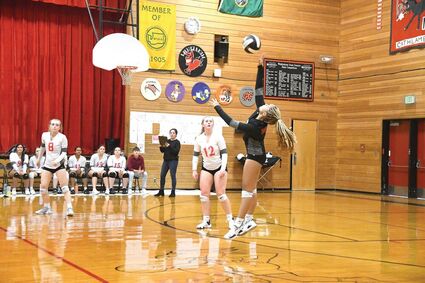 "As you can see we started a bit sluggish in set one but improved steadily over the match," Coach Hurley said. "Kalama is a tough squad."

Niemeyer and Abdul-Kariem had big digs in the back court, and Ava Thomas had an overall strong match, according to Hurley. Kerstetter had six kills and six digs.

The Lady Mules traveled to Morton/White Pass yesterday (Wednesday) for their final game of the regular season after The Eagle had gone to press.

As of Monday, the team was in sixth place in league with a 3-5 conference record.

Check the Wahkiakum Eagle Sports Report on Facebook for updates on District game times and results.