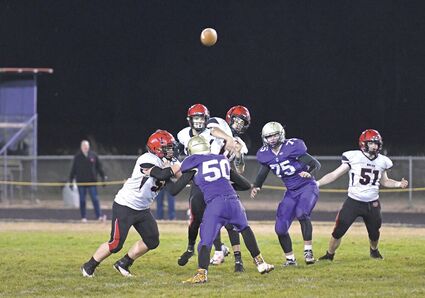 It's not going to get much easier.

The Wahkiakum Mules lost 50-28 to the Onalaka Loggers last Thursday in a Central League football game.

Today (Thursday), they travel to Napavine to challenge the 9-0 top ranked Tigers for a berth in the playoffs.

The Mules kept up with the Loggers for three quarters.

In the first quarter, Onalaska took the lead on a 43-yard pass play. The Mules responded with Zakkary Carlson returning a kickoff 80 yards for a touchdown. Onalaska took a 14-6 lead on a 37-yard touchdown run near the end of the quarter. They boosted that to 20-6 early in the second quarter on a short run.

Mule quarterback Brodie Avalon connected with Dominic Curl for a 68-yard touchdown pass play to cut the Loggers' lead to 20-14 at halftime.

The Mules took a 21-20 lead early the second half on a 51-yard touchdown pass from Avalon to Carlson; Curl kicked the point after touchdown for the Mule lead.

The Loggers regained the lead, 26-21, with a short touchdown run. Carlson put the Mules ahead as he returned Onalaska's kickoff 75 yards for a touchdown; Curl kicked the conversion for a two-point, 28-26 lead.

From there, control of the game belonged to Onalaska. The Loggers pounded in a touchdown to end the third quarter with a 34-28 lead; they added two more touchdowns in the fourth quarter and blanked the Mules for the final 50-28 score. 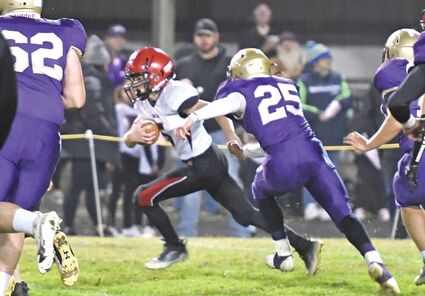 Grant Wilson picks up yardage for the Mules against Onalaska.

Avalon completed three of 13 passes for 131 yards and two touchdowns. Carlson passed once for a 45-yard completion to Cooper Carlson. Curl was the leading receiver with two completions for 80 yards and one touchdown.

The Loggers gained 381 yards on the ground, while the Mules gained 108. Z. Carlson gained 36 yards rushing, and Curl had 34 yards.

The 2-7 Mules head to 9-0 Napavine today (Thursday). The winner advances to the state playoffs; the season ends for the loser.