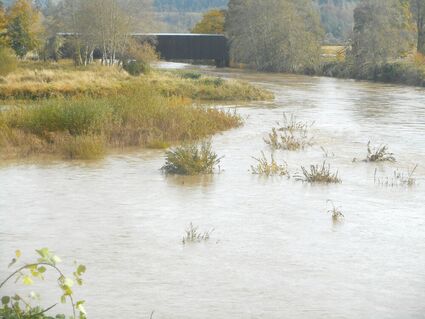 The Grays River poured under the Covered Bridge during recent high water.

A Commentary on Flooding: It's flood time again. Let's talk about floods so new folks have some information as we move into flood season. Our low lying areas, if we hadn't populated them already, would be marshes or wetlands with trees that can live in water. Those trees, often noticed at high tide, can be seen across SR 4 from the turn onto West Deep River Road. Two hundred plus years ago when Lewis and Clark came through, only the tribes who lived in the region would wander through for fish or game or wapato, a vegetable that still grows in some wet areas. With the wetlands flourishing in the valley, fish could make their way up Grays River easily and the land was as natural as it could be.

As early settlers moved in, they tried to change what they found into what they had left behind, farmland. They cut trees and drained water from the land as best they could. Now we maintain dikes built to "control" the water. Later, farmers wanted connections with others, so roads became the next widespread project that impacted heavy rain events. Historically, these rain events were called "freshets," usually occurring in the spring of the year when snow is melting up high. Our current floods come from heavier rainfall, and snow melt in the spring. We used to occasionally have a "one-hundred-year flood" with unusually heavy rainfall. But now we are having more regular periods of heavy rain bringing serious flooding. As we humans are apt to do, we assume that what we experience today will be the same experience generations down the line, but when we change the natural landscape, we change more than we realize. We ultimately change our culture as has happened here. Add managed logging and even more has changed.

Over many years, we have learned a lot, here described by Irene Martin in the chapter on farming from her book, "Beach of Heaven" published in 1997: "Ironically, the road network that the farmers once sought so aggressively has done much to shift agricultural production out of the county. Originally, residents viewed the road – which linked Cowlitz County on the east end and Pacific County on the west end – as the way to end isolation and dependence on river traffic. However, this same new road took milk from the dairies to more centralized processing locations, including Portland, eventually resulting in the demise of local creameries that could not achieve the economies of scale possible in facilities receiving milk from a large geographic area. To remain competitive and comply with new health regulations, farmers turned from hand milking to milking by machine in the early 1950's and increased the size of their herds to pay for the innovation. The small dairy herd of a dozen or so animals became obsolete, and farmers bought up the small farms and consolidated them with others to form larger farms. More stringent regulations regarding the disposal of animal waste products increased the cost of dairying. Environmental concerns regarding the draining of wetlands, which originally formed much of the farmland now behind dikes, make it more difficult to keep such land in production. An influx of residents from other areas encouraged the selling of farmland for housing.

Implementation of the Endangered Species Act has focused attention not just on species but on the habitat necessary to support them. Increasing value is being placed on wilderness and rural recreational experiences for those who live in urban areas. Areas such as Wahkiakum County that support threatened and endangered species such as bald eagles, salmonids, northern spotted owls, marbled murrelets and Columbian white-tailed deer, are being viewed as habitat for wildlife. The spectacular scenery also encourages the area's use for recreation and retirement. As a result, residents who have relied on the three traditional adaptations in Wahkiakum – fishing, farming, and logging – struggle to cope with environmental regulations and policies that are designed to preserve wildlife and habitat here, feel squeezed out, so that families with generations of history on the land can no longer make a living and often must sell their land. Innovation, imagination, and cooperation characterized Wahkiakum County's farmers from the earliest days. However, the values of the wider society changed during the twentieth century, In the nineteenth century, agriculture was esteemed as the highest use for land, thus permitting the diking, draining and clearing of much of the county. By the late twentieth century, such habitat alteration became either unacceptable or prohibitively expensive for farming purposes. Farmers responded by seeking alternative crops or going out of business."

We are now into the twenty-first century and realize that Irene had eyes of vision. Last year, our west end of the county saw many homes purchased by folks from out of the area, often retirees. We saw others working in their homes by internet. We see small farms often used by retirees with a garden for themselves, not intended for income. We are proud of the Zimmerman's organic vegetable farm, one of only a few commercial farms left in the Grays River Valley that supports their family members. Change is happening and even the Naselle Youth Camp may be offering classes to students brought to the camp to learn about the natural resources now protected in two federal refuges in the area and land preserved by the Columbia Land Trust, the Nature Conservancy, WA Department of Fish and Wildlife, and the Department of Natural Resources. Environmental tourism may become one of the "new" industries being developed in other regions of the country. Flooding is the price we pay for living here. It is one part of nature we cannot control, so learning to plan for floods in the future will help us accept the challenges of water in our front and/or back yards in order to remain here.

November 19: American Legion Ladies will sponsor a bingo at Rosburg Hall at 6 p.m.