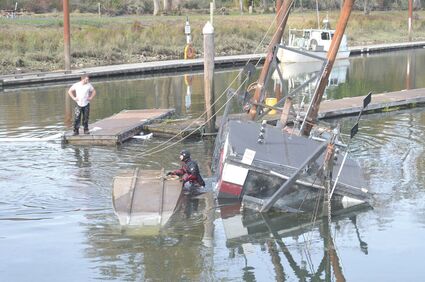 Dennis Mueller, a member of the dredge crew, looks on as diver Jacob Peterson disconnects Wahkiakum County Port 1's skiff from the dredge.

In hindsight, the cameras at the Elochoman Slough Marina show the slow sink of Wahkiakum Port 1's dredge in the early hours on Sunday morning before the sun rose, but on a quiet and chilly weekend, with only the fish and birds or the occasional walker or duck hunter intent on that day's quarry, no one noticed the vessel was sinking until a little before 10 a.m.

That's when Port Manager Todd Souvenir, who was hunting in Idaho, started getting calls and texts.

Port Commissioner Brett Deaton hurried down when he got a call, as did port counsel, Tim Hanigan. They found Bruce Oliver, the park host, heading over with a pump. Maintenance Manager Jerry Nakonsky and his son Dakota were soon on scene, along with another member of the staff, Amber Cameron. Dennis Mueller, who is a member of the dredge crew for the marina, arrived as well. Not far behind were Josh Adams, who moors at the marina, diver Jacob Peterson, and contractor Billy Peek and his crew.

"It was really nice to have a great staff to take care of things as well as individuals from the community help minimize the situation," Souvenir said.

Things went a little slower after that. While diving, Peterson attached air bags to lift the dredge from the bottom. Everyone else focused on pulling the dredge toward the landing, shifting and adjusting with each issue that arose, including removing the spuds, the two tall metal columns rising from the dredge, which were dragging on the ground below.

They disbanded around 4 p.m., and returned early the next morning with bigger equipment, getting the dredge out of the water within an hour or two.

After the recent heavy rain, port staff checked all the boats and lines at the marina, including the dredge, Souvenir said.

"Everything was fine," he added.

He can only speculate about what happened, but says the port will be taking a closer look at the dredge, clean it out, and salvage what they can while they talk to their insurers. Whether the dredge will ever be operable again is yet to be determined.

In 2015, The Eagle reported, "The dredge, which the port purchased from Rose City Yacht Club, cost $20,000. Port Manager Jackie Lea believes that additional work and equipment may cost another $30,000-40,000 but it is a far cry from the $450,000 it might have cost the port to have the work done. Owning the vessel should save the port a lot of money in the long run...She isn't pretty, but if she does what she was designed to do, it won't matter." 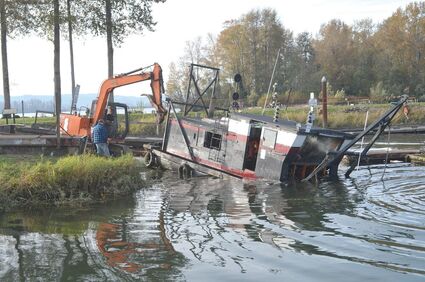 Dredge recovery: Billy Peek uses an excavator to pull the dredge from the marina on Sunday. He came back the next day with bigger equipment and pulled the dredge to dry land in a couple hours, with help from his crew and others.

"I know Jackie and the commissioners spent a lot of time and energy and money on the project," Souvenir said on Tuesday. "The dredge was definitely an unfortunate scenario, but like it said in your original article, it wasn't pretty but if it does it's job it won't matter. It did do it's job. We were able to dredge in 2018 and 2019. Our soundings have held through that time frame. We have little to no silting in since that time. The dredge did it's job."