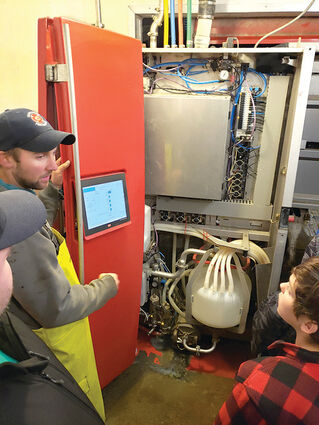 Austin Burkhalter showing the Robo Rascals where the milk is collected and the computer panel with data. Photo credit Jessica Vik.

The Robo Rascals (an after school 4-H robotics club, grades K-8) took a field trip to see the robots that milk cows at the Burkhalter family farm-Grays River Holsteins. This trip was actually scheduled for the week prior but due to a robot not working correctly, it was pushed off a week. Instead, a tech came out that day to the farm and got them up and running again. This is a reality with technology. It works great when it works but sometimes, companies have to call for help.

Arriving at milking time, 13 kids along with 4-H parent volunteers were able to see how the robot first cleans the teats two separate times and then uses laser sensors to line up the teatcups for attachment to the udder. The total milking cycle is about 8 minutes with 1.5 min just for cleaning and attaching. One cow gave 18 lbs. of milk in 6 minutes. A typical cow will give an average of 60 lbs. of milk per day. It takes about three weeks to get new cows trained to be confident to go through the process themselves. There are a handful of cows with udders that are shaped so the sensor doesn't recognize them. These cows get special attention, by assisting the robot in latching. The rest of the cows do it on their own. Wearing a collar that is scanned, the robot can tell when each cow was last milked. There were three cows while the kids were there that kept circling back around into the milking stall. They were after the grain that is given to them while being milked. The robot read that they were just milked and opened the gate to let them out; but they tried again. This was funny to the group because it took a few tries before they gave up. 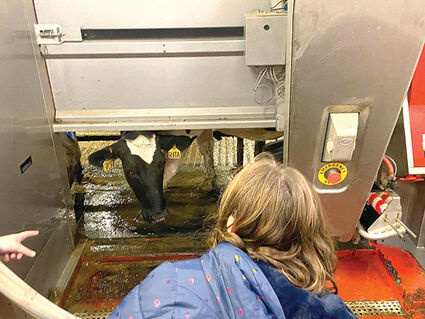 A cow sneaks a peek at the Robo Rascals watching her get milked. Photo credit Kristy Gifford.

This farm is milking about 85 head right now which is down a little from their normal numbers, closer to 100. Their cows are well treated, starting from the beginning. They feed their calves fresh milk, helping them grow into healthier animals. The microchip in the collar the cows wear also collects other data that can be seen on the screen of the robot or computer. This tells the farmers information about the health of the cow, how much milk they are collecting from it, when she is in heat and if she is sick by sensing whether or not she is chewing her cud.

Austin, a third-generation farmer and 4-H Alumni, answered lots of questions from the kids who took an interest in what they saw. Questions like: How often is milk picked up? Every two days. How much does a robot cost? $100,000 plus set up. What if the cow's udder is too big for the robot? Then she won't be able to be milked by the robot. Breeding plays a role in this. Several kids just enjoyed seeing cows while others liked watching the laser sensors work to line up the udder. As an organic farm, they follow the protocol for that type of market. Their milk can be found at Fred Meyer, Safeway, and Natural Grocers under the brand Organic Valley.