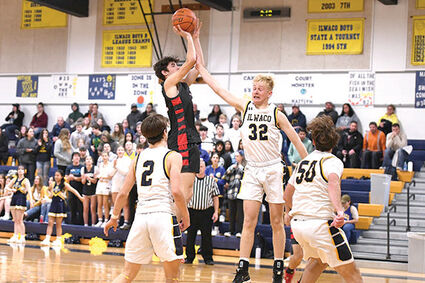 Kyler Sause puts up a shot for the Mules against Ilwaco.

The Wahkiakum Mules boys basketball team is off to a running start this week with two wins on the road.

With seven seniors and a bit of height, the team is capable of scoring from the perimeter and from inside, but they are still learning how to balance those assets and when to take advantage of them, according to Coach Todd Souvenir.

The Mules opened the season with a win against the Fishermen in Ilwaco last Wednesday, 64-62.

"Last year Ilwaco ended our season. It was definitely a game we were looking forward to," Souvenir said.

The Mules trailed the entire game but took the lead for the first time with two minutes to go. It went back and forth for a bit, but with 18 seconds left on the board, Jacob Johnson hit a little floater and put the Mules back in the lead.

"Ilwaco got a good look, but it didn't fall," Souvenir said. "We definitely came away with a good win and felt like it was one we were fortunate to walk away with. A lot of guys did a lot of good things and I thought we responded in some tough situations throughout the game."

On Tuesday, the Mules traveled to Onlaska and won again, 64-39.

Despite a rough start on the offensive end, the Mules slowly took advantage and were able to get a good lead, Souvenir said.

Several players got "good playing time," he added, and five of them finished the game scoring in double figures.

Avalon led the Mules with 14 points. Carlson added 12. Sause, Curl, and Maddox Moore had 10 points each. Titan Niemela had three. Sebastian Britt and Hendricks added two apiece, and Grant Wilson finished with one.

The Mules host Toutle Lake tonight (Thursday) and travel to Castle Rock on Friday, followed by another home game on Tuesday against Kalama.