Garden center coming in the spring 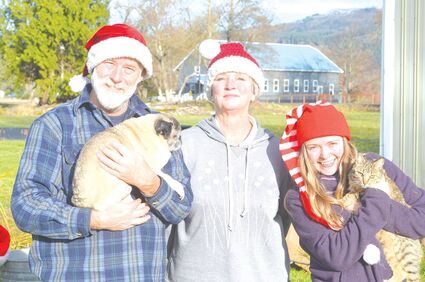 From left to right, Gene and Dawn O'Neil are joined by their first hire, Natalie Fink, as well as Ruby the dog, and Fern the cat as they prepare to officially open Puget Island Gardens this spring. The new garden center will have everything a garden needs from plants to tools, and everything in between, as well as gifts, antiques, classes, and more.

Though winter is officially with us, activity at the coming Puget Island Gardens is anything but dormant. Gene and Dawn O'Neil, along with their assistant Natalie Fink, are busy dreaming, planning, and otherwise preparing for the opening of a garden center this spring.

Gene O'Neil grew up gardening, and has had a long career in sales in the garden business. Dawn's career focus was on hospitality and food, with a specialty in pastry, and she has worked at the Four Season Hotel in Seattle, and run her own Airbnb.

"We are service minded and want to bring a really fabulous experience for people who are coming to shop," Gene said. "We're excited to put those years of experience together, to open a little garden center that the community can really love."

The pair hail from Seattle and Everett, though Dawn was raised in Michigan and came to the northwest in 1983. Gene first visited Wahkiakum County in 2010, and in 2019, they bought the house on Puget Island. The pair love old homes, and while they still own a beautiful one up north, they migrated down here in 2020 with the onset of covid-19, and eventually, car load by car load, made this their primary residence.

"We couldn't be thrilled more," Gene said. "It's a beautiful community and people here that we've met and gotten to know, it's just fabulous. We feel we've got the right place to put down some really nice roots and see how it goes."

When Danny Silverman at Skamokawa Gardens retired, the O'Neils asked for his advice and told him what they were thinking about doing.

"We'd been toying with the idea of getting into the business," Gene said. "When he retired, I thought, there's no one else in the area, and in my world, cause I'm in that world, there's nobody really opening independent garden centers anywhere."

"It's one of the things I've wanted to do, and we have a really beautiful setting," he added. "We just said, let's do it."

The O'Neils already have some inventory thanks to another friend in California who was retiring from the business. This fall, they opened up on the weekends to meet people, and let the community see what they were up to.

They are closed at the moment, but they've been engaged in wreath making workshops for the holiday, and preparing their property for their official opening in April, with a possible soft opening in March.

When I drove by their property at 520 State Route 409 recently, there were tell-tale signs that local contractor James Trott was at work with large equipment bedecked in camouflage, and gravel being spread for a necessary parking lot.

The new parking lot will make it easier for Puget Island Gardens to receive more goods, as well as future customers.

They plan to have everything a garden center offers, according to Gene. Plants, annuals perennials, trees, shrubs, potting soils, fertilizers, all the remedies for gardens, gifts, tools. And as they grow, they will add landscaping services and designs.

The garage is currently being used as a holding area and temporary classroom, but eventually the O'Neils hope to replace it with a beautiful two story structure featuring a reception, banquet, and garden center. There are plans to remodel a nearby barn and turn it into a retail space.

There will be more space for antiques and collectibles curated by local people, as well as products created by local artists and artisans.

"We are big into shop local, and supporting local business and taking care of the earth," Dawn said. "We want people to come to our garden center and feel inspired. We want to create a space for people to gather. Our wreath workshop is just the beginning of ongoing workshops that will allow people to come and socialize and make things."

Because they are gardeners, there will be places for kids to play in the dirt, and because the O'Neils are social creatures, there will eventually be music and outdoor movies in the summer, just like the events they used to hold when they lived in their Everett home.

Before her own move to Wahkiakum County, Natalie Fink was working at Shorty's, a garden center in Vancouver.

"I always liked gardening, but fell in love with it," she said.

She started taking classes at Portland Community College, and discovered a penchant for design. After moving to Puget Island, she struggled to find any horticulture jobs, and eventually settled into something in Longview, hoping that something more fitting would fall into her lap.

Fortune was smiling at the O'Neils and Natalie when they met during the Puget Island Garage and Yard Sale (PIGYS), over a conversation about cats.

"There is a show in Portland called the Far West Garden Show," Gene said. "I was starting to talk to some of the nurseries about what I was doing. One of them said, 'Gene you're not really an expert plant guy. You can't open a garden center without an expert.' All the sudden the conversations I was having with Natalie turned into 'Natalie, don't get another job! We're going to hire you!' It's just been really terrific since. She's just been a good fit for our company and what we are doing."

"We couldn't be more delighted," Dawn said. "We feel like she is our good luck charm, that she wanted to join us and she's got great energy, great ideas, she's very much a self starter. She helped us design our logo, she's managing our social media."

Come spring, Puget Island Gardens will be a place for people to gather, have a good time, and enjoy life, if the O'Neils have anything to say about it.