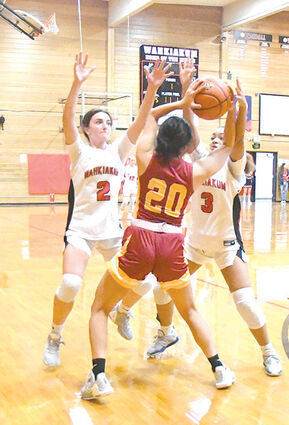 Last Wednesday, the Lady Mules traveled to Kalama and beat the Chinooks 57-46.

"The Kalama game was a lot of fun," Coach Rob Garrett said. "Reigha [Niemeyer] was unconscious, shooting 7-11 from three point range, and leading the way with 31 points. I thought everyone did a good job in the game, working at their role to complete a team effort. Our defense looked solid most of the time, and we came out with a good league win. Kalama is much improved and will be a good team come post season."

On Friday, the Lady Mules hosted Winlock and won easily 63-14.

"Winlock is rebuilding but with that being said our girls looked great," Coach Garrett said. "We had multiple defensive shifts that were right on point. We shared the ball well, and kids were knocking down shots and playing with confidence. It was a lot of fun, and if we can play with that energy and confidence against the better teams we will be much more successful against tougher competition."

Garrett praised McKinley who pulled down 20 rebounds, scored 11 points, and had five steals.

"That's a big confidence builder for her," he said.

On Tuesday, Mossyrock came to town and beat the Lady Mules 46-31.

"Tonight's game was a little rough, but I thought the girls worked hard and never gave up. Unfortunately we just couldn't get much going offensively and our defense eventually fell through in the fourth quarter. Genevieve's defense and rebounding really improved tonight which is going to be big for us moving forward. Miya [Kerstetter] also played with good energy all night long. Amirah [Abdul-Kariem] guarded Mossyrock's best player even though Amirah was a bit under the weather and she did a good job holding her in check all night long."

Kerstetter scored 12 points and had five steals. Bailey added nine points and had eight rebounds. Niemeyer had seven points and five assists. Fleming scored two and had six rebounds and Abdul-Kariem picked up a point.

The team will travel to a two day tournament in Mount Vernon on December 28, and return to regular season play on January 4.