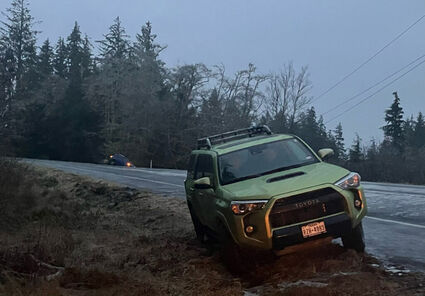 Sergeant Brad Moon of the Washington State Patrol spent a cold night in his vehicle when one particular stretch of road proved to be impassable thanks to an arctic blast and freezing rain. Photos courtesy of Brad Moon.

According to Sheriff Mark Howie, when the arctic blast gave us freezing rain on December 23, it stranded one deputy at home, and a trooper at the Wahkiakum County Sheriff's Office.

Thankfully, according to the sheriff's report, it was a pretty quiet night in Wahkiakum County.

Sergeant Brad Moon of the Washington State Patrol, who started his shift that morning around 11:30 a.m., was not so lucky.

He was handling one thing up north before the storm came in, while another trooper headed to SR 105 to deal with a DUI. While heading south again, a call came in about a car that slid off the road near the Chinook tunnel, so Moon headed in that direction.

"The storm started to come in and the freezing rain started to hit," Moon said. "About the time I got to Naselle it was starting to get a little bit bad. So it took me quite a while to get all the way down to the tunnel."

The strong winds throughout the day sent the Columbia River crashing onto the roadway before the freezing rain even started, so there was already a layer of ice on that portion of the highway.

Moon isn't exactly sure of the time, but believes he got to the scene sometime between 7 and 8 p.m. While there, he learned that a couple vehicles ran off the road on 101 around milepost 17, so after checking on the accident and seeing that the woman was receiving aid, he headed toward Chinook.

"I drove on straight ice all the way through Chinook and made it all the way to the 101 alternate," he said. "I was only going about 12 miles an hour. I got to the end and I knew I needed to turn right to go up to milepost 17. I was slipping all over the road. Our Explorers are all wheel drive, so I was doing the best I could to keep it on the road."

He made the right turn onto 101 and almost slid straight into a ditch.

Moon pulled off the road into a gravel rock area near a PUD substation and told dispatch he wasn't going to make it to milepost 17. He sat there for a little bit but the desire to help was stronger and it wasn't long before he was on the phone with one of the fellows who was stuck in the ditch.

He told the man he wasn't able to make it, but when the person on the other end of the line said he'd just been struck by another car, Moon knew staying was no longer an option.

I gotta go, he thought to himself.

"A semi drove slowly past me running bobtail, in

other words it didn't have a trailer, just a semi," Moon said. "It was probably a quarter mile ahead of me. I started to drive really slow, I was only going six or eight miles an hour."

Just shy of milepost 17, he explained, there is a straight stretch before you go over a hill and come down and then go up another hill. Right there, the road banks a little bit to the left.

"Just as soon as I started that, I saw the semi," Moon said. "It was in the ditch on the left hand side. I slowed down for a second and asked the guy if he was okay and he said he was. I started to hit the gas to try and go forward and my vehicle slid sideways across the road all the way into the ditch on the opposite side. I didn't fishtail, I wasn't driving when it went in, I literally slid exactly sideways all the way across the road into the ditch."

Luckily, he went into a spot that was fairly flat. There was no damage to his vehicle. The man driving the semi came over and helped Moon straighten out.

During that time, he said, as he sat in the dark facing northbound in the southbound ditch, he watched nine vehicles go off the road in front of him, behind him, on both sides of the highway.

The driver of a car coming from the other direction told Moon there were another half dozen or more cars around the corner after he too got sidelined by the ice.

"There was not one single car that made it through the area," Moon said. "Every single car ended up in the ditch."

A tow truck was sent for him right after he went into the ditch. It slid off the ditch on the northbound side. A second tow truck showed up to help the first. When they got him free, the second tow truck tried to turn around and slid into the southbound ditch, partially blocking the lane.

"For 10.5 hours I watched the cars slide into a ditch," Moon said. "I had one stop about three to five feet in front of me, almost hit me head on. They were coming back from the Seattle airport."

That driver managed to get out of the ditch moments earlier only to start fishtailing all over the roadway, finally landing front of Moon. After they checked on him, he told them to get back in their car and to stay in it with their seatbelts on.

Another car came around the corner and sideswiped them.

They were okay because they got in their car, Moon said.

About 4:30 a.m., a couple Pacific County deputies signed on, Moon said. One blocked traffic southbound on 101 at Johnson's Landing, the other was able to slowly make his way down 401 and block anything coming northbound.

"At that point I was fairly confident we weren't going to have any more traffic coming in through there," he added.

But the fun wasn't over.

"It salted it," Moon said. "I kept wondering, when is he coming back?"

A half an hour later, a WSDOT pickup truck came through and the driver told Moon that the salting truck had gotten stuck going up the hill just around the corner.

"It was just a nightmare there in that particular area," Moon said. "As we found out with the tow trucks and the WSDOT trucks, chains, studs, it didn't matter what you had, just because of the pitch of that road, and how much ice was on it, everyone ended up in the ditch. But it was a treacherous evening, there is no doubt about it."

Moon was able to get out of the ditch around 8:30 a.m. He headed to Long Beach to get fuel and he was dispatched to a confrontation between two people following an accident. He made it back to the office around 11 a.m., almost 24 hours after he started his shift. 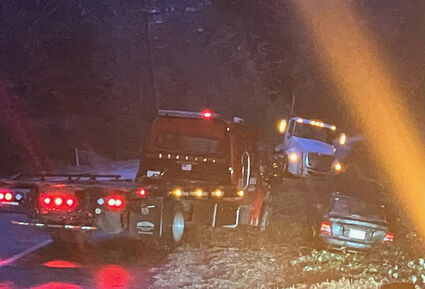 "I've been involved in a lot of different incidents in patrol, but this has got of be one of the most stressful, because I know I'm the one who is supposed to be out there helping people get out of those situations," Moon said. "I was completely helpless. I was unable to do anything."

"It was kind of like taking a rest in the barrel of a shot gun," he told another trooper. "It was just a matter of time before someone was going to come around the corner. Are they going to hit you, hit somebody behind you? You didn't know when it was going to be over."

"I don't want to relive that again!" Moon said.

After a few days off, Moon is grateful to be back at work, able to keep doing what he does best: helping other people.