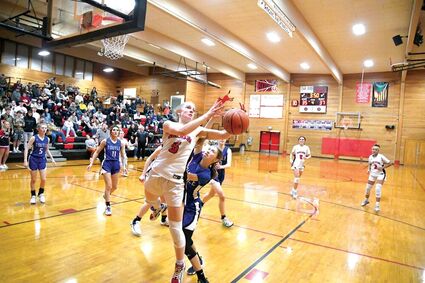 Genevieve Flemming snags a rebound for the Lady Mules.

The Wahkiakum Mules girls basketball returned to regular season play this week after Christmas break with a win and a loss.

Last Wednesday, the Lady Mules lost 44-41 in a close game with Toutle Lake.

"We struggled as a team," Coach Rob Garrett said, "but both Amirah [Abdul-Kariem] and Bailey [McKinley] really stepped it up offensively which gave us an opportunity to keep the game within reach. Amirah played great on both sides of the ball. In the end, unfortunately, we had too many mental breakdowns that led to easy buckets for them. Hopefully we can learn from that game and get better moving forward."

On Friday, the Lady Mules came back with a 51-40 win against Morton/White Pass. 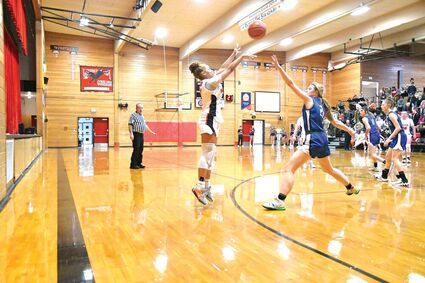 "The girls made a goal to have more fun and most of us were able to do that," Coach Garrett said. "When we play to have fun the game comes easier and good things tend to happen. Both Reigha and Miya [Kerstetter] led the way offensively. Defensively we took a big step forward as a team and learned our rotation a little better, making it tough for MWP to score in the half court."

The Lady Mules traveled to Rainier on Wednesday, but a score was not available by press time.

The team heads to Adna on Friday and hosts Toledo on Tuesday.