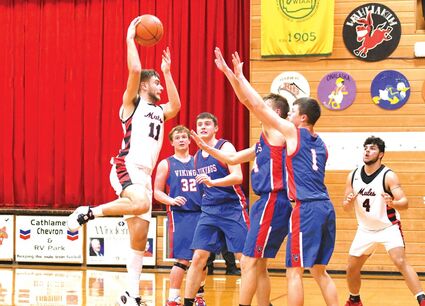 The Wahkiakum Mules boys basketball team followed a loss to Morton/White Pass last Thursday with wins against Willapa Valley and Winlock this week.

"Going into the season, I think everyone would anticipate MWP to be the number one team in the league," Coach Todd Souvenir said. "I think the kids were ready for the challenge and excited for it. I thought we played physical and hard the entire game. To hold that team to 29 points in three quarters was definitely positive."

"I told the boys that was the most exciting and best performance of the year, even though we ended up losing," Souvenir added. "We were in the game with one of the top teams in the league and it had nothing to do with our offense, it was based on our defense. As long as we are improving defensively, we improve our chances to continue our season in a very tough league."

Souvenir praised Niemela, Curl, and Sause. Thanks to their defensive work on the inside against MWP's 6'7" Josh Salguero, he was held to 11 points.

On Saturday, the Mules easily won a rescheduled contest against Willapa Valley 73-51.

"Willapa is one of the better teams in the 1B," Souvenir said. "I was a little worried after the loss to MWP, about them regrouping and being prepared for that challenge. We started out pretty good, but we gave up some offensive rebounds. Throughout that game I really challenged the guys to be more physical and give the same effort they did against MWP.

"We played better offensively in that game, and we continued the effort defensively, especially on the boards. Dom is our emotional leader and he did a lot of good things in that game."

Avalon scored 20 points and had eight rebounds. Carlson had 19 points. Sause added 16 more and Johnson and Grant Wilson had five points each. Curl scored four points and pulled down 10 rebounds. Niemela had three points and Maddox Moore finished the game with one.

On Tuesday, Brodie Avalon scored a career high 43 points in a 90-57 win against Winlock, tying the school record for most points in a game.

"Everybody was hot," Souvenir said, "but it was fun to see them come together and be excited for Avalon throughout the game." 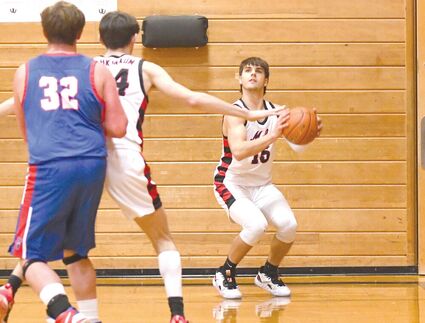 Mule Zakk Carlson lines up a shot over the Viking defense.

With a coming contest against a tough Napavine team on Thursday, the Mules prepared by playing a faster pace than usual against a young Winlock team.

After what was a fun game for the Mules, the team celebrated for a minute, Souvenir said, but it was time to rest and get ready for the next one.

The Mules host Napavine tonight (Thursday), Toledo on Saturday and travel to Adna next Wednesday.