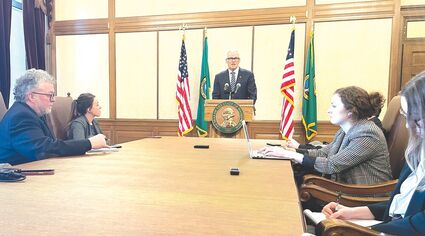 Gov. Jay Inslee tells reporters he will push for a bigger investment in programs for the homeless in this session of the Legislature. Photo by Alexandria Osborne.

Homelessness is still a big issue throughout Washington, and while the state has spent millions, the governor wants to invest more.

In a press conference Jan. 19, Washington State Governor Jay Inslee said while certain encampments have been cleared as a result of past funding efforts, there are still not enough places to house the homeless.

In Spokane, 100 people were able to move into a building with four full-time mental health counselors and two chemical-addiction counselors, he said.

Inslee said while that program was successful, there is still more work to do and more investments are needed. He said he hopes to work with the Legislature this session to fund more programs for the unhoused.

"We are getting places but it's limited by the dollars we have available. That needs to increase if we're gonna solve this problem," he said. "If we had three times as much money, we would have cleared three times as many encampments."

Since Inslee has been governor, he has been able to increase budgets for programs to aid the homeless, he said. He said he has found that current programs do help people get back on their feet, he said.

Inslee said Washington has been successful in the past decade in the sense that it is one of the best places to live and visit.

"As a result, you get a lot of people moving here from other states. If you don't build the housing for them, which we have not done, you get a homelessness crisis," he said. "So, we need to build more roofs."

In addition to programs to help the unhoused, Inslee said he hopes to work toward lowering the legal blood alcohol level to reduce impaired driving.

While some small businesses may worry their customers won't be buying as much alcohol, Inslee said business owners need to think about people losing their lives to impaired drivers.

"You're not a very good customer when you've lost your life," he said. "We cannot allow that to continue."

The Washington State Journal is a non-profit website funded by the Washington Newspaper Publishers Association Foundation. Learn more at wastatejournal.org.