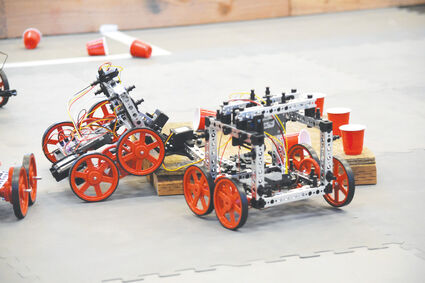 Robots in action in Endgame: Can the robot on the right prevent the other one from getting onto the platform? Photo by Lisa Nelson.

Last Friday afternoon Naselle Grays River Valley School District hosted the inaugural robotics competition for middle-schoolers, called the "KM Cup," pitting robotics clubs from the east of KM versus clubs from the west of KM. Each club can sponsor one or more teams, where these teams of two robots each are called "alliances." There were three from NGRVSD (6 robots, 8 students), two from Wahkiakum SD (4 robots, 4 students), and one homeschool team from east of KM: the Columbia River Robotics Club ("CRRC," 2 robots, 4 students). The competition consists of matches between alliances where each match is divided into three parts: "Autonomous" lasting 30 seconds, wherein their robots must score points using pre-programmed instructions; "Teleop" lasting 90 seconds, wherein the teams drive their robots using joysticks and radio to control robot movements gathering balls and cups; and, "Endgame" lasting another 30 seconds, wherein they can do everything from Teleop, plus "steal" scoring elements from the other alliance, or, attempt to be "king of the mountain" for bonus points. As you can imagine the first part is quite cerebral, the second is very intense, and the third is a crowd-whooping frenzy.

The championship match of the bracketed tourney featured Team RC from NGRVSD versus Team CT from CRRC. The two alliances were tied after the Autonomous period with near maximum points each. During Teleop, both teams quickly scored the very difficult "ball in cup" maneuver to maintain the tie, then Team CT inched ahead by scoring an extra ball. This held for the next 30 seconds as both alliances carried around balls and cups attempting to score. Then just before Endgame, Team RC scored a second "ball in cup" to move clearly ahead. During the frenzy of Endgame all four robots were pushing each other around trying to be "king of the mountain" on the platform, or, to push the other team off. Because the platform bonus points would determine the final result, Team CT needed to get onto the platform and Team RC only needed to prevent that from happening. Team RC prevailed and the NGRVSD club won the first KM Cup. 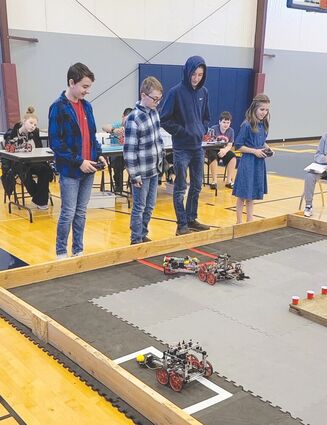 A crowd of over 50 people cheered on the teams from the stands that were cozily wrapped around the 12' by 12' competition arena. High school students helped coach the middle school teams, and helped the referees keep score. It was intense scoring the action. Our tentative plan is to hold the KM Cup competition twice per year, once near the end of each semester. This is to provide first-year middle school (and advanced elementary) robotics students with a chance to demonstrate what they have learned. Veteran middle schoolers and high school students have several SkillsUSA tech competition opportunities with other teams from around SW Washington. The next two are Thursday Jan 26 in Ilwaco and Wednesday Feb 1 at Naselle. Check with your school robotics club for competition details, or, to volunteer to help out. All of the clubs are looking for part-time mentors (electrical engineering, mechanical engineering and design, automation, and computer programming).