November's 70 percent vote sways the board 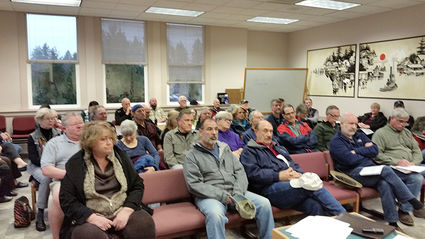 Fifty to 60 people turned out Tuesday for the county commissioners' hearing on a proposed ordinance to regulate junk and solid waste on private property. The board adopted the ordinance by a 3-0 vote.

Around 50-60 people attended a public hearing before the vote, and speakers at the hearing voiced opposition and support of the ordinance.

The ordinance has been three years in the making. Responding to public input, the board of commissioners held community meetings on the issue in the spring of 2013, and citizens at those meetings overwhelmingly supported the proposal. The board appointed a committee of citizens and public officials to draft a proposed ordinance. That group finished the work last year, and the board put it on the November election ballot as an advisory issue; 70 percent of voters urged the board to proceed with the ordinance.

In the end, Commissioners Dan Cothren, Blair Brady and Mike Backman gave it a grudging 3-0 vote.

Both Backman and Brady commented they had opposed the ordinance when first proposed, but with the show of public support from the election, they said they would vote for it.

Backman added that he had a question about if or how the ordinance would be amended in the future.

The board of commissioners can make changes, Cothren said.

"It's not a hard process if we find faults," Brady said.

"I agree with Mike," Brady added. "I was not in favor in the beginning, but we're here to represent the voters, so I will support it."

He called for the vote, and when it passed 3-0; there was applause.

Mike Bingham commented that the language was sometimes vague and seemed arbitrary, for example, in saying a three-year-old vehicle could be a junk vehicle. There should be leniency in the language, he said, and he suggested forming a committee of knowledgeable citizens to advise on values and rates.

Kay Walters suggested that people could use the ordinance to report neighbors and cause them trouble.

It would be nice to let people have options for screening their property, said Lee Tischer. "Let them plant a row of fast growing cedars so it is out of sight," he commented.

Mark Vik questioned the constitutionality of the ordinance. The ballot language was confusing and poorly written, he said.

"Nobody seems to know what it said," Vik said. "It was not the same as what's written here."

"I know two people who, when they voted, thought they were voting to restrict biosolids," said Gilbert Vik. "They thought the term solid waste meant biosolids."

Commissioner Brady responded that the prosecuting attorney had vetted the ballot language. "I'm sorry about that; if that's your opinion, you should have brought it up a lot sooner than today for the public hearing," he said to Mark Vik.

"It's unconstitutional," Mark Vik said. "If you want to get rid of the junk, buy out the guy who has it and clean it up."

"The thought of more government makes me ill," he added, "but having a junk yard across the street is worse. It's like a cancer that won't stop growing."

Becky Belangy handed commissioners a letter outlining her concerns: Unsightly property affects all other property owners along the road. The county should allow people to keep their junk but they should keep it out of sight, she said.

"Now is the time to address this question, or Wahkiakum County will become a dumping ground," she said.

Dick Swart, a member of the Cathlamet town council, said the procedure to create the proposed ordinance was "well done."

"I am convinced that this council will harmonize with our own junk car and trash ordinances so there's no differential treatment for anyone in the county," he said.

Gerald Meiers, who owns property on Altoona/Pillar Rock Road, commented there is a hoarder on that road.

"There are other commercial interests on that road," he said. "We are trying to improve it to draw more people into the county. . . and so we're going to try to bring in people from out of state and out of the area to enjoy our beautiful Pillar Rock Road, and the things they see, depending on the venue they go to, it's trash, and added to regularly."

J.B. Robinson of Puget Island commented that real estate agents have had clients who want to move into the area change their minds or lose interest when they see unsightly properties.

Richard Erickson, a member of the board of directors of the Wahkiakum Chamber of Commerce, said that organization supports the ordinance.

Two of the members of the committee which drafted the ordinance spoke in favor.

The committee spent a year working on it, said Marsha LaFarge, commissioners' former clerk of the board. They worked with the prosecuting attorney, and they looked at state law and ordinances from other counties.

"A 70 percent vote for the ordinance is a pretty clear mandate that the people want to have some sort of ordinance," she said.

"We tried not to be overreaching," said committee member Lori Scott. "There were revisions based on public input.

"To make changes now would be inappropriate. The people voted on the draft that was on the ballot."

Department Director sue Cameron commented she felt the definitions in the ordinance were pretty clear. The department has prepared a handout for people who are interested; it has information about implementation, a flow chart of processes, and pages with information about recycling and other resources.

"We don't expect this to be a difficult process," she said. "We have done a lot of work for you."

Deputy Director Chris Weiler added that the department has experience in handling citizen complaints about other citizens. "We are very careful with complaints," he said.

One may view the ordinance at http://www.co.wahkiakum.wa.us/documents/SolidWasteNuisanceOrdinance6-24-15_000.pdf.

So glad to see this happening. I once owned the little white cottage on Sunny Sands with the picket fence. I was very sad to let it go back in 2003, but then very glad that I did sell it given what happened a short time later. An immense trash pile moved in next door. Maybe now the Island can return to the beautiful place it was meant to be.