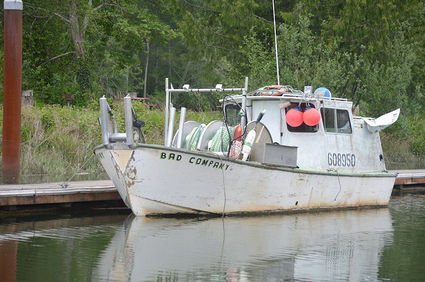 The Oregon Fish and Wildlife Commission at its March meeting reviewed fishery harvest reforms on the Columbia River that effectively remove commercial gillnetters from the mainstem river by 2017 but allows gillnetting in the lower river in select areas.

The three-year transition will be complete by next year.

It consists of harvest allocation shifts, with recreational anglers taking a larger chunk of the mainstem fishing while commercial fishing transitions to select off-channel areas, such as Youngs Bay and Knappa and Blind sloughs in Oregon, and Deep River and eventually to the Cathlamet Channel, all in the lower Columbia River estuary.

It also includes enhancing production of salmon in the select areas with more hatchery fish, all by the 2017 fishing season. The idea is to offer commercial fishing areas where few of the wild protected fish venture.

The plan also calls for the continued assessment of alternative commercial gear, such as seines, that it is hoped can be used in the mainstem with fewer negative impacts – mortalities – on wild fish surging up the river.

"The off-channel 'select areas' that now exist would be supplemented with the outplanting of additional chinook and coho to help make up for the loss of mainstem catch," according to the new fishing regulations adopted by the Oregon Fish and Wildlife Commission.

The Columbia River Fish Management and Reform was a joint Oregon and Washington Policy initially adopted in 2012 and readopted in 2013. The shift in allocation has already begun, and each type of salmon has its own story.

The allocation to recreational anglers in 2013 for federal endangered species act impacts on spring chinook was 65 percent of the allowed catch with gillnetters on the mainstem river getting up to 35 percent of the total allowed catch. The actual ratio in 2013 was 60/35 with 5 percent unallocated.

That changed with the ratio of recreational to gillnet catch in 2014 - 2016 to be 70 percent recreational and 30 percent gillnet. For these years, allocation goals have been met.

In and after 2017 when gillnetters are no longer allowed to fish the Columbia River's main channel the ratio changes to 80/20 for spring chinook.

Providing additional hatchery fish releases in select areas was also one of the policy objectives.

That is progressing, with actual releases through 2015 near the pre-program objectives, according to the summary. Actual releases of hatchery juveniles in 2015 were 90 percent of target for spring chinook, 93 percent for coho and 86 percent of target for select area bright fall chinook. ODFW will not meet its goal of brights in 2016 as the collection of broodstock in 2015 fell far short of goals.

In the second year of releases of select area brights by WDFW in building a new select area site near Cathlamet, the goal is not being met due to disease issues. With a goal to release 250,000 smolts each year, WDFW released 200,000 in 2014 and just 141,500 in 2015. WDFW expects to reach just 46 percent of its target this year.

Expanding commercial fishing opportunities may be having more success, but the opportunity in Oregon select areas is limited because fishing already was allowed there much of the year. Winter fishing is one time of year that has been expanded which has occurred in three consecutive years for an average of 20 additional days per year, the summary says. Participation and harvest have been limited, however.

WDFW has been evaluating Cathlamet Channel as an additional select area site.

ODFW is testing purse and seine fishing as alternative fishing methods, but seining in the fall took a high number of upriver chinook and has especially been harmful to released steelhead, which gillnetters are required, often unsuccessfully, to return to the river. The summer seining took moderate numbers of chinook, but sockeye numbers were high.

The average weight of chinook caught by seine fishers was 34 percent less than those caught in mainstem nets. The biggest issues with the seine fishery are low mark rates, so many fish must be returned unharmed, and the high startup and operational costs, according to participants in the fishery.

Tangle nets (less than 4.25 inch mesh) were tested in 2011 and found, for the most part, to have decent catch rates of hatchery fish, moderate mortality and low bycatch, but full use of the nets in 2013-15 are also taking up to 22 percent coho salmon. Tangle nets were required for five of the eight commercial fishing openings in 2015.

According to the summary, winter/spring chinook harvest for gillnetters in the mainstem totaled 891 fish: 10,999 chinook were harvested in select area fisheries for a total harvest of 11,890 chinook. That was 119 percent of the five-year average and the best take by commercial gillnetters since 2010.

At one point in 2015, upriver impacts left on the table by the recreational fishery downstream of Bonneville Dam were transferred to the commercial fishery under adaptive management provisions.

Commercial gillnetters in the mainstem fished ten periods in the early fall season over a record run of 1.3 million fall chinook, landing 33,422 chinook and 202 coho. In the late fall season, fishing was limited to five periods, but landings were high at 43,638 chinook and 819 coho.

Overall, changes resulted in 2015 in the second highest number of recreational angler trips to the lower Columbia River since 1982.

For gillnetters, the overall catch was the second highest since 1989, largely because of record returns of chinook in 2015. Mainstem fisheries accounted for 69 percent of the commercial catch with select areas accounting for the remaining 31 percent.

From 2013 to 2015, the mainstem gillnet fishery targeting fall chinook accounted for 46 percent of the value of all commercial catches. Coho harvest in select area fisheries represented the second largest harvest component for commercial fishers.