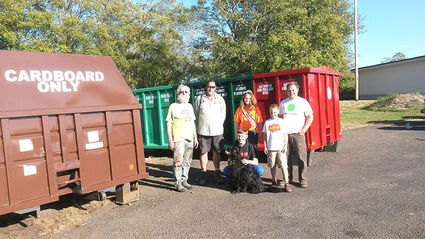 Courtesy of B. Hokkanen

Did you see the new colors for the county's recycling bins? Brown for cardboard; red for tin and aluminum cans; forest green for #1 and #2 plastics; and safety green for mixed paper.

Volunteers from the Wahkiakum 4-H Robotics Club and The Healthy Living Collaborative are teaming up with Wahkiakum County to repaint our county recycling bins at three locations. The repainting of the first pair was completed last week at the Puget Island Fire Hall. Thank you Fire District #1 for providing space to work, county commissioner Mike Backman for stopping in to help paint and liven up the work, and Cathlamet Building Supply for a generous discount on materials. Repainting of the other two pairs of bins is expected to be completed by the middle of September.

This is part of the effort to "clean up" our county recycling efforts. Most people are recycling well, but not everyone. Dan Tchosewski of The Healthy Living Collaborative says "If an area looks like a dump it will be treated like a dump. We are painting, cleaning, adding new signage and adding fencing to make our recycling areas more attractive. Too often we see that some people have dumped garbage on the sites. This costs money to clean up."

It is also part of our campaign to educate recyclers on what the county can actually accept as recycling materials in our bins. When the wrong stuff is tossed into the bins they have to be treated as garbage and our county not only gets no compensation for hauling, the county has to pay extra to take it to the garbage dump.

Julianne McKay-Beach, president of the Wahkiakum 4-H Robotics club, and lead on this recycling education effort, says: "Only Plastics #1 and #2 are acceptable in the plastics bin. Look on the bottom of the container. If it doesn't have a 1 or 2 inside of the little recycling triangle, it is not recyclable in the county bins. No styrofoam, no plastic boxes, no grocery store plastic bags. The list goes on. All it takes is one bag full of the wrong stuff and the whole bin becomes garbage and goes to the dump. This is really unfair to all of us who do recycle carefully." The county earns money when it hauls a load to the recyclers, but in the last two years we have never earned that money from our plastics. Visit the county office and look at the revenue spreadsheet. Ouch! 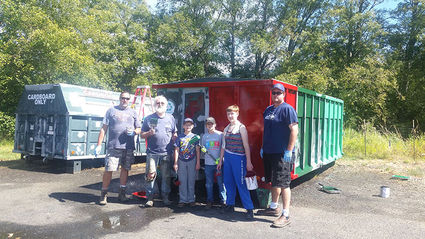 The other bins have similar restrictions. For example, no pizza boxes in the mixed paper bin (food residue), and labels must be removed from cans going into the aluminum and tin can bin. While painting the first pair of bins many people stopped by to give encouragement or drop off recyclables. The two most common questions we heard were: "Are we going to be able to recycle glass?" and "You are telling me I have to take my cans out of the bag before putting into the tin can bin?" Glass is too expensive to haul at this time, the closest recycle-anytime location for glass is in Longview, and a plastic or paper bag turns the bin into garbage.

In late September the Wahkiakum 4-H Robotics club begins its educational campaign at the elementary school. Other materials are recyclable in our county, but not at the county sites. Look for details of what all can be recycled and how to recycle it later in September. If your organization would like a small poster to place in your window that details when, where and what to recycle in our county, please send a note to the 4-H Robotics Club at the WSU Wahkiakum Extension Office.