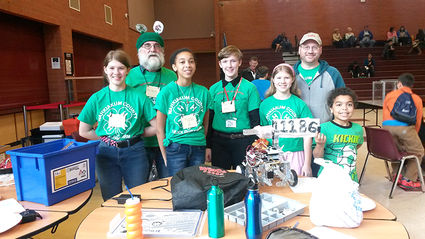 The First Tech Challenge (FTC) competition is for high school teams. We competed last Saturday against teams from the Vancouver area and Southwest Washington. Our rookie team did well. We had six matches and our robot ran in both autonomous and teleop (driver-controlled) modes in every one of our matches - one of only three teams present to do so. There were many equipment failures and DNS's, but not us! Mules don't ever stop kicking. This is a three-tournament series to determine the southwest Washington Champions. Our next FTC team competition is December 10. I have been coaching Science Olympiad and Robotics teams for 14 years now, and this is the very first time I have had a team whose devices ran perfectly every time we competed. I am very proud of these young people. And they are rookies! Wow!

The next competition for our 4-H Robotics Club is for our FIRST Lego League team, on December 3 in Camas. This is for middle school students. We have room on either our FLL team (middle school) or our FTC team (high school) for a few folks who are willing to work hard to catch up. Contact me through 4-H or WHS if interested.