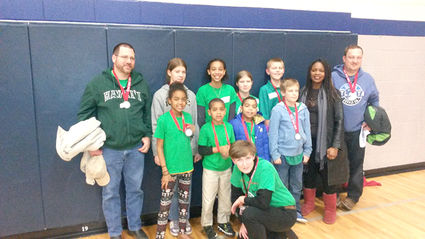 One happy team after our competition this past Saturday in Camas WA.

The FIRST Lego League competition requires students to present to three panels of judges in three areas of expertise, then to compete with other teams for their best of three runs of their robot through a series of challenges.

All four of our team members were new to FLL this year and did remarkably well considering the veteran competition, mostly from Vancouver and Camas schools. When all of the dust settled we placed sixth out of 18 teams.

There were several highlights. We had a very high score in the Core Values presentation, scoring "Exemplary" in six of the nine categories and "Accomplished" in the other three.

Lizzy and Peter had three perfect runs of each of their missions. Sam's robot was the only one from any team the entire day to complete the "cow milking" mission. Lydia led us off perfectly in each match getting us off to a steady start and quick transitions. We saved our best run for last, proving once again that Mules never quit.