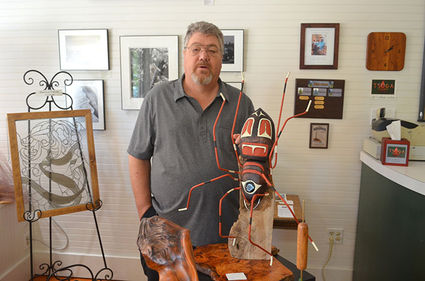 Cathlamet resident Robert Stowe has been a photographer for most of his life. More recently, he's taken up painting, but it turns out his heart belongs to carving.

Story and photo by Diana Zimmerman

Robert Stowe, a recent transplant to Cathlamet, has done a little bit of everything, so it makes sense that he might tackle art in the same manner.

Stowe was one of seven kids, the son of a military man.

He was born in Aurora, Colorado, at Fitzsimmons Army Hospital. The family moved to Germany, then to Camarillo, Calif., to Oxnard Air Force Base. Then they moved to Texas.

"Big Spring, Texas," Stowe said."Worst place I've ever been in my entire life. If you find the armpit of Texas, head south until you find the crotch, and that's Big Spring."

His mother hated it there, and so his father went to Vietnam, and the family moved back to California. Eventually, Stowe graduated from Hueneme High School and joined the Navy, where he served as an electrician's mate for six years.

When he got out, he moved to Lake Arrowhead with the woman who would become his wife, Elizabeth. The two have been married for 37 years and have raised her two children from a previous marriage, John Charland and Colleen Charland, and their own, Katherine Stowe.

Elizabeth ran the regional water plant in Palo Alto. According to Stowe, she was the highest ranked woman in California, in that field.

"When she was the operations manager," he said proudly, "they won the national EPA award for best plant."

He returned to school and got a degree in journalism from San Francisco State. Then he began covering sports for Fuchs publications, and eventually the San Mateo Times.

According to Stowe, his wife got a job with the Chancellor's Office for the Cal State Universities, running the environmental program for all their campuses. So Stowe shifted gears again. When they moved to the Los Angeles area, he ran the gate at the Hollywood Bowl, and bought a binocular business from a couple there that wanted to retire.

"I did that for about 10 years," Stowe said, "but electronics killed me. They had big screens, and people didn't need binoculars anymore. The best weekend I had, I did around 500 binoculars at $5 a pop. The last one I did? We did 30 binoculars."

After that, he went to work for a famous amusement park, helping to run the front gate. Eventually, he ended up at their university, training new employees.

"It got to the point where a new class would come in and I wanted to say, 'Run like hell'," Stowe laughed. "People think [it] is the greatest place in the world. It is, for the guests. But not the employees."

He worked for Long Beach Transit for over 11 years, driving either a 40 foot bus or a 60 foot articulated one.

Stowe was a gruff character and didn't put up with much.

At one stop on his route, he laid down the law after having a little trouble. He called in a police officer to back him up the next day.

"There are three rules," Stowe told the young riders who had caused problems the day before. "Number one, I'm a [mean man]."

Well, that's not exactly the language he used, but you get the idea.

"Number three, if you don't do that, I will call this officer and he will come and take you off the bus and give you a ticket for $500 for disturbing a mass transit vehicle. The most important thing for you to remember is that I am a [mean man], and I will do this."

He didn't have any more problems at that stop. And in 11 years, not one fight broke out on his bus.

Stowe has held a camera in his hand for most of his life. When he was around 10 years old, his mother gave him a Kodak Instamatic Camera for Christmas.

He was so smitten with the gift that it didn't take long before she was back, asking him to slow down.

"I can't afford to develop all these pictures," she told him.

"I was having fun," Stowe laughed.

As a journalist, he had to take his own pictures while covering sports. He even managed to win a National Press Photogapher's Association award for a picture he took at a baseball game.

"The third baseman was coming up on a pop fly," Stowe said, "and the catcher was there. They met, and it showed the agony on the third baseman's face due to the location of the catcher's knee. And the ball was right there."

He didn't limit himself to the usual landscapes, portraits, or sport pictures. He got his diver's certification and took up underwater photography.

One day he was looking at a picture he had taken of a pistil and stamen on a flower.

"I thought it was gorgeous," Stowe said. "I had to paint it. I'd never painted in my life."

Thus, his art began to shift. He asked a friend to teach him to paint. He learned a lot from her, but he's had to learn a lot on his own.

"I love oil," Stowe said. "I love the way it looks, but I hate the time it takes to dry. Acrylics dry within 24 hours. If you make a mistake with either of them, it's no big deal, you can paint over it. Watercolors? Not so much. You make a mistake, you either incorporate it or live with it."

No matter. It turns out what he really loves is carving. He found a teacher in Onalaska, and he's been carving for about six months.

Recently, he attended a wood carver's convention in Tacoma, and took second place in competition. He found out that the only reason he didn't take first place was because he had incorporated metal into his work, and they were purists.

He's been a member of Tsuga Gallery since November 2016.

Come buy my stuff before I die," he laughed.

Stowe and his wife decided to move to Portland after more than 30 years in California. They sold their house and moved their things into storage. Elizabeth had spent time in the area, starting up their environmental programs while working for FEMA. She liked Portland.

"Oh no!" Stowe said after five minutes on the freeway. "This is what we're trying to leave."

While flipping through a AAA book, Elizabeth discovered that there was a squirrel bridge in a little town called Longview. She wanted to see it. So the couple drove north.

"It's a cable between two trees," Stowe said. "Wow. That's a squirrel bridge. Imagine that. But then we saw a sign for Long Beach."

They had to go. The funny thing is, they never got there. Not until much later.

"We came into Cathlamet and fell in love with it," Stowe said. "It was completely serendipitous."