Board targets April for new superintendent 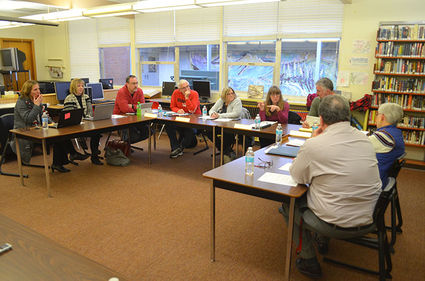 The Wahkiakum School District Board of Directors and administrators met two more times, on Friday and Tuesday, to continue their discussion on an informational flyer about the levy as well as the superintendent search process.

The board agreed that Melissa Kreuder, who handles human resources for ESD 112, would be the first point of contact for applicants who had questions for the district.

Kreuder said she would bring a final draft of the job description to the next school board meeting on January 22.

After reviewing two possible timelines, the board decided to have the job posted the day after the board meeting, on January 23, in order to be able to make a selection before spring break in April.

There was continued talk about creating a survey for the public, but Kreuder suggested that the community might become more interested in the process when the board had narrowed down the search to a few candidates.

"I would agree that the trust has already been put on you to make the decisions on the parameters, but when it gets down to the final three, then the public will want to meet them," said Lee Tischer, a former member of the board who was in attendance.

The board looked over the contract with ESD 112, who is handling the search. The work will cost the school district between $4,500 and $7,500.

Director Paula Culbertson stated her concern that ESD 112 was not providing a break down of charges.

Superintendent Bob Garrett had some concerns of his own.

"Being the fiscally conservative individual that I am, I don't like an open ended contract up to $7,500," he said. "I don't understand why they can't be more specific about what we're getting. I'm going to try to have a conversation to see if they won't nail this down to more like $4,500."

He suggested that the school district take on more of the steps of the process.

"I'm not sure we couldn't have done this for a lot less money," he said.

"The reason we went to the outside agency is so we can assure people that we are doing this search with a neutral party. Perception is a lot. I think we need to have the perception that we are being as dispassionate and logical as we can in this search."

In other matters, Garrett had drafted an informational flyer for the levy and was looking for input. He said that the Julius A. Wendt Parent Teacher Organization had expressed interest in paying for the mailing, but the matter had not been decided at that time.