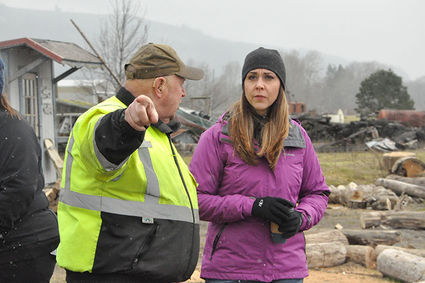 Congresswoman Jamie Herrera-Beutler, R-District 3, visited the eroding East Sunny Sand shoreline Tuesday to see what she could do to aid efforts to set up dredge spoils deposits this year.

County officials have been working for two years to establish a 10-year beach nourishment program; they're now working to complete a Section 408 impact review and convince a landowner to sign a right-of-entry easement which would complete the easements needed for the Sunny Sands disposal site.

Herrera-Beutler and her aides met county officials and neighborhood residents at the public fishing access parking lot. On the beach, County Commissioner Dan Cothren described the scope of erosion and its causes, and then the party walked down the beach to see how the shoreline has eroded close to houses.

Ship traffic and the deepening of the shipping channel has exacerbated the situation, Cothren said.

At the end of the walk, Herrera-Beutler identified what needs to be done to speed up the permitting process.

The single missing right-of-entry easement could significantly delay the dredging program, she said.

"If you have to go to imminent domain condemnation, the legality issue can drag," she said.

County Public Works Director Chuck Beyer said he is communicating with the holdout property owners and is sending them maps and other paperwork that will show them how their property will be affected. They're concerned about a concrete bulkhead, he added, and the eroding shoreline has almost reached that wall.

Cothren said the county needs to be ready to start a condemnation action.

"Myself, I'm not willing to wait much longer," he said. "We've got to get the process going."

The congresswoman also said she would like to see movement on the possibility of incorporating the county's 10-year beach nourishment program into the 20-year program proposed by the coalition of upriver ports.

"This seems so simple to me," she said. "We're going to dredge: Just put the spoils where it will be most beneficial." 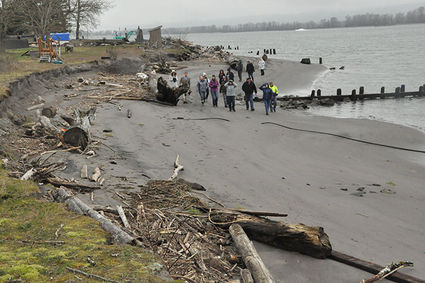 Congresswoman Jamie Herrera-Beutler and a group of local officials and residents walk the East Sunny Sands beach, passing through an area of erosion caused by the eddy behind a shipping channel pile dike.

The county's application is further advanced than the ports, which won't be finished for perhaps three years, she said.

"We have suggested to the ports that they could go a long way in relationship and our trust with them if they would help us meet that gap," she said. "I'm willing to go back to the ports and more formally and strongly suggest that they help us come up with a solution for the interim period."

Cothren said they county's goal is to create the long term dump sites.

"We can't keep coming up with the money that we're spending here," he said.

Herrera-Beutler commented that the Corps of Engineers and upriver ports need to take some ownership of local problems and their solutions.

"Our message to the Corps, as well, is we're not going anywhere on this," she said. "The whole region has seen benefit from shipping, but you're paying a big part of the cost."