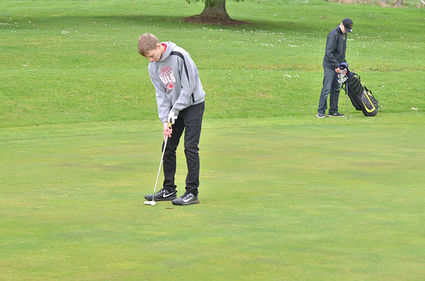 Wahkiakum Mule golfer Logan LaBerge on the green. He hit a 45 at Skyline's nine hole course on Tuesday.

Heidi Bruntmyer struggled with her putter, shooting 55 to win her heads up individual match with Lana Holt 67.

Also playing for the boys were Elijah Doiron 50 and Kaden Andersen 59.

Last week, Zach Johnston scored 22 points and Tyler St Onge 21 as they respectively finished third and tied for fourth at the Astoria Invitational in an 18-hole modified Stapleford scoring format.

The Mules junior varsity team of Heidi Bruntmeyer 8, Michael Martin 12, Kaleo Silva 10, Robert Will 2 and Victor Hummer 13, totaled a four-best score of 41, finishing third in the JV event to Seaside 94 and Astoria 57.

Top three teams were Scappoose 161, Astoria 125 and Ilwaco 118. Bruntmyer's 30 points paced Wahkiakum to fifth out of seven schools in the event.

Today (Thursday), they go Chehalis to take on Adna. On Friday, the JV's compete in Astoria; on Monday the team goes to Seaside, and on Tuesday to Ilwaco. Next Thursday, the girls compete in Astoria and the boys go to Life Christian.