Wahkiakum on the Move showing growth 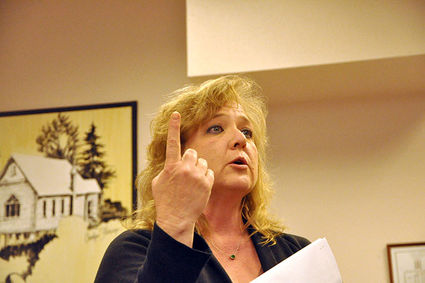 Wahkiakum County's transit service has slowly grown and expanded since it was formed in 2004, system operators said Tuesday.

Wahkiakum on the Move has grown from service three days a week with one bus and two drivers to six days a week with runs between Naselle and Kelso with four buses, three vans and 11 drivers.

The service added new routes, including Saturday service, last October, and ridership is growing, program coordinator Camille Goldsmith reported to the board of county commissioners.

The routes and days of service are:

--Monday-Friday, local routes in Skamokawa, Cathlamet and Puget Island, and

There is a hole in funding, Goldsmith said--there has been no funding for buying buses since 2014.

"Our buses are starting to cost more in maintenance than what we can afford," she said.

She added that she would soon ask for commission approval to apply for a grant to purchase new buses, and commissioners by consensus immediately authorized her to apply for the funding.

Commissioner Mike Backman suggested posting notices in Longview where the bus stops. For example, at the Fred Meyer stop, there's no indication of where to catch the bus, he said.