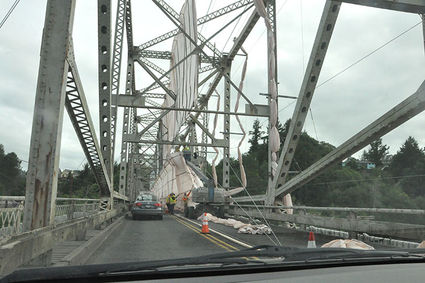 Workers install containment curtains as traffic passes by on the Puget Island bridge. This week, the contractor is installing equipment for sand blasting old paint off the bridge's steel structure.

With much of the initial preparations out of the way, painting should start this week on the Puget Island bridge.

The Royal Bridge, Inc., crew has been stringing cables and attaching curtains and chain link fencing to prepare for painting. Once the curtains and screens are in place, they'll install sand blasting equipment and clean off the old paint all the way to the steel structure of the bridge.

Traffic has been reduced to one lane to supply a work area for the contractor. The workers have installed a screen floor under the bridge. A layer of canvas will become a floor and mesh with the curtains to enclose the blasting area and capture all the debris removed from the structure.

"You can crouch walk on it," Martin Fuest, project manager for the Washington Department of Transportation, said in an interview last Thursday. "With a tarp on it, it's not too bad."

Workers wear a climbing harness and attach a safety line when they're over the bridge rail. During blasting, they'll wear full coveralls and breathing respirators.

The contractor should start sand blasting this week, Fuest said.

On Tuesday, workers returned from the Memorial Day weekend to set lines for a screening curtain that follows the centerline on the roadway. They've already hung curtains overhead and on the upriver side of the bridge.

Next they'll install the dust collector and sand blasting equipment on the closed traffic lane.

The department uses three basic shades of gray on its bridges, said regional communications manager Tamara Greenwell; the Island bridge will probably have what she called a "washed out gray."

The contractor will start replacing the deck in early July, Fuest said. They'll remove the asphalt paving and old beams that form the deck and install new 20-foot-long glue-laminated beams. They'll cover the new decking to protect it from traffic; final paving will occur when all the deck is replaced.

The deck work will occur at night, and the bridge will be closed to traffic from 9 p.m. to 5 a.m. The county ferry will run all night, at the state's expense, Greenwell said.

"People will be impacted," Greenwell said of the closures. "We looked for the way to have the least impact. We can't shut the bridge entirely." 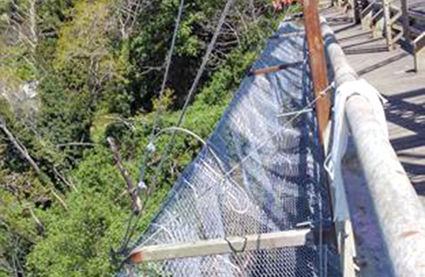 Workers have installed chain link screens under portions of the bridge; next they'll spread canvas which will provide a working floor and containment system.

During the days, traffic is limited to one lane and governed by solar powered lights. Greenwell said that a consultant analyzed traffic speeds to set timing of the lights, initially on a cycle approximately three minutes. After seeing traffic in action, the time has been lengthened to four minutes to make sure all vehicles have time to clear the work zone.

The contractor will open the bridge to two lanes for some holidays, Greenwell said, including the just passed Memorial Day weekend, the Puget Island Garage and Yard Sale in late June, Independence Day and Cathlamet's Bald Eagle Festival.

Bad weather will impact work, Fuest said. And when there are forecasts or measurements of wind speeds of 50 miles per hour or more, they'll take down the containment curtains.