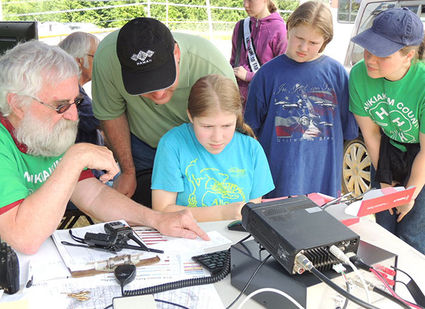 Last weekend was busy in Wahkiakum County. Along with the Kite Festival and the Puget Island Garage Sale there was the national Amateur Radio Field Day wherein roughly 40,000 amateur radio operators all over the country take their radios and antennas out of their houses and into a field for 24 hours to test emergency preparedness.

Our county's radio club, N7WAH, with the help of Wahkiakum PUD, Wahkiakum 4-H, Wahkiakum School District and Smokey Waters set up at a baseball field at Wahkiakum High School. We operated from 11 a.m., Saturday to 11 a.m., Sunday. We contacted 289 other stations, from western Washington to New York state. We had three stations set up and running: SSB (Single Side Band) where we talked using voice communications, Digital where we talked using a computer, and GOTA (Get On The Air) where we encouraged new hams and folks without their amateur radio licenses to give radio communications a try. This activity is also a great time for a barbecue for family and friends and visitors - and we took time off (in shifts) Saturday evening to enjoy camaraderie and food.

Field Day is also an informal competition, with over 20 categories of operations for different clubs. We chose to enter the difficult category of "very low transmitter power, battery only, no 110 and no generators." This very low power (5 watts maximum) can make it hard to break through "pile ups" against stations that are operating at up to 1,500 watts of power. Each of our three stations had solar panels set up for recharging during the day, and each also had enough battery power to make it through the night. Our thinking was that if we can operate this way for 24 hours straight we will be able to operate like this indefinitely to get messages out to the rest of the world when "the big one" hits. 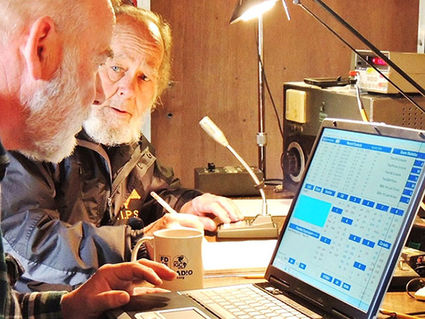 Gordon WA6TTR and Mark AE6DI at the SSB station asking each other "can we catch that one?"

We also had an information booth and education stand set up at the GOTA station where all interested in learning more about radio and emergency preparedness were welcomed. An informal operating contest was held, with all contacts going into our club score. Taking honors for elected officials was Paula Culbertson from the Wahkiakum School board, followed by Ryan Smith from the Cathlamet Town Council and Stewart Feil from the City of Kelso. Taking honors from agency representatives was Ray Stoddard from SAR (Search and Rescue). Top honors amongst folks under age 19 was Damaris Blalock. Their scores were added to our "serious" stations to come up with a total of 3,790 points for the club in our first year of entering Field Day as a group. Comparing with last year's results, this looks like it will place us in the top five in the country for our category. We will know in another month.