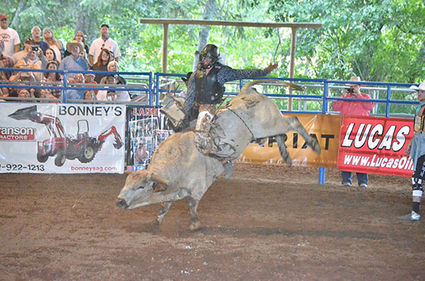 Going for eight seconds--a rider tries to say on a bucking bull in the exhibition last Friday at the fairgrounds in Skamokawa.

A standing room only crowd of people turned out to watch professional bull riders in Skamokawa on Friday.

The Coastal Farm & Ranch Challenge of Champions Tour added a date in Skamokawa this summer thanks to the Wahkiakum County Fair Foundation, who hosted the event. The foundation ran into some opposition from public figures in the past few years but remained steadfast, holding fundraising bake sales, dinners, auctions and more, because they believed that they could make this happen and that it would be a good thing for their community.

Final numbers aren't in, but the estimated 800 people that attended the event on Friday proved them right.

"It was fantastic," Amber Eaton, the foundation president said happily on Tuesday.

"We hope next year will be even bigger and better," she added. "The cowboys are excited to come back."

Seating was limited for the huge crowd, but a recent $50,000 grant will pay for bleachers-hopefully before the bulls come back to the arena in Skamokawa next year. 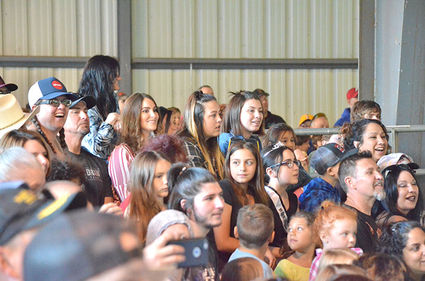 A huge crowd filled the stands to take in the Challenge of Champions Professional Bull Riders at the fairgrounds in Skamokawa on Friday.