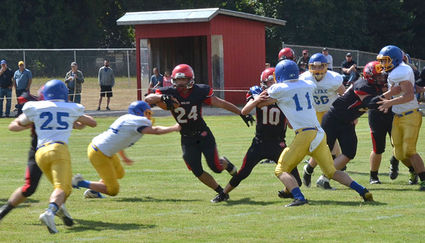 Mule running back Quentin Nelson, 24, follows the blocking of Lucas Brown, 10, and other teammates through the Colfax line for a big gain. The Mules defeated the Bulldogs 14-0 in their season opener on Saturday.

As part of an east-west football doubleheader, the Wahkiakum Mules defeated the Colfax Bulldogs 14-0 last Saturday in Cathlamet.

In the day's other game, the Napavine Tigers handed the Liberty Lancers a 41-7 defeat.

The teams will gather on Liberty's home field in Spangle next year to open the 2019 season.

The Mules controlled the game, gaining 278 yards on offense while holding the visitors to 83 total yards.

Sophomore quarterback Kaden Anderson connected with senior Quentin Nelson on a 15-yard pass play to give the Mules a 6-0 lead with 2:48 left in the second quarter. Lucas Brown kicked the conversion for a 7-0 lead.

Nelson scored again at the beginning of the fourth quarter on a six-yard run. Brown's conversion kick made the score 14-0, and the Mule defense did the rest.

The Mules head to Adna this Friday to play the Pirates, 35-0 victors over Willapa Valley last Friday.

The eastside teams stayed overnight in Cathlamet school gyms. On Friday, they traveled to Skamokawa Vista Park for a barbecue and games such as tug of war. On Saturday morning, they breakfasted together before their games.

"It was a really good experience," commented Mule Coach Eric Hansen. "Everyone had a great time. We look forward to next year." 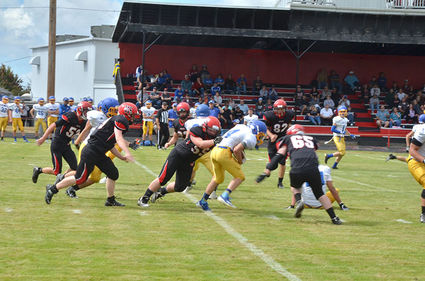 Mule defenders Ashden Niemeyer, 55, Beau Carlson, 65, and the rest of the defense bring down a Bulldog running back.