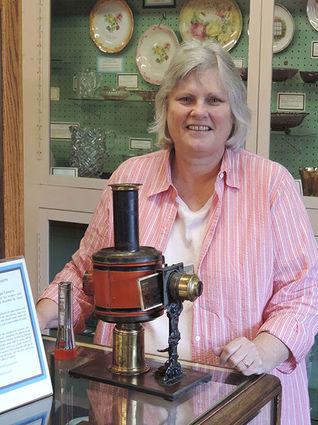 Kari Kandoll, curator for the Wahkiakum County Historical Society, is also on the board. This isn't proper, according to Kandoll, but it has been necessary, as the society struggles to find volunteers.

The Wahkiakum County Historical Society Museum faces an uncertain future if they can't find some volunteers.

"Right now, the 10 member board is down to six and some of them are struggling with health issues," said Kari Kandoll, who began volunteering at the museum in 2007 and became the curator in 2009.

A curator really shouldn't be on the board, Kandoll noted, but she is. She's needed.

When she started in 2007, she was indexing articles from old newspapers. She became fascinated by the stories and the people of Wahkiakum County.

It's not just the history that interests Kandoll, it's the genealogy.

"There were the parents with five kids who lost all but one to scarlet fever," she said. "There were all the hunting, and logging, and fishing accidents that happened. I read about the Spanish American flu that moved through."

Those are a lot of sad stories, but there are fun ones too. There are family photos, and pictures of people enjoying local events or making the most of disasters-like a shot of two fellows laughing while standing on gas pumps hoping to stay dry on a very flooded Puget Island.

Kandoll enjoys the challenge. It turns out Mrs. Clarence Page was once Eliza Rankin.

Then there is Ray Bowman's WWI uniform, which is on display. His medals are there, and so is his ID. Kandoll was able to track down a photo and reunite all of that with Bowman's helmet, which had been donated by Robert Goodfellow, a local pharmacist who died in 1981. It turns out that Bowman had owed the pharmacist some money and Goodfellow took the helmet as payment.

So far Kandoll has curated over 7,000 items. There are five different handwritten records and she'd like to have it all in one computer database, one that also notes where everything is.

She and the youngest volunteer, Tiffany Mora, 18, put together a lovely new hat display.

There is a lot to see, but the display is inviting, not overwhelming. It has changed a lot since this writer last stepped in there as a pre-teen.

That's something that Kandoll hears a lot, "I haven't been in there since I was a kid."

The museum is closed for the winter months, from the end of October to the first full weekend in May. During the summer months, they are open from 1-4 on Saturdays and Sundays. But Kandoll's number is posted at the door, and she is glad to open the door, if you will give her some advance notice.

They need board members. They need hosts. They need people to help with filing, indexing, and more. They'd love to see some volunteers from other parts of the county-from Skamokawa and the Westend.

"Unfortunately there just aren't enough of us," Kandoll said. "We're getting burned out."

They also need some help financially.

Two ductless heat pumps have been donated, but the museum, which has to stay at 61 degrees at a minimum all year round to protect the collection from damp and mold, needs to raise about $1,600 to pay a licensed electrician to install electrical wiring.