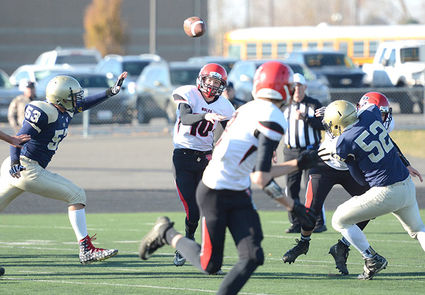 Wahkiakum Mule quarterback Lucas Brown fires a pass toward a receiver in the Mules' 35-28 overtime loss to Tri-Cities Prep in the opening round of the Class 2B football playoffs.

It wasn't easy, but the third ranked Tri-Cities Prep Jaguars managed to defeat the 14th ranked Wahkiakum Mules 35-28 in overtime in the opening round of the state Class 2B football playoffs on Saturday.

The undefeated Jaguars may have taken the young, 5-5 Mules lightly, but they soon saw the mettle of a team that battles in the tough Central League. The Mules were the only one of the league's five entries in the playoffs to lose last weekend.

The Mules struck first, with Braxton Johns scoring on a seven-yard pass from Lucas Brown, who kicked the conversion for a 7-0 first quarter lead.

In the second quarter, Brown connected with tight end KC Berry for a 16-yard touchdown. The conversion kick gave the Mules a 14-0 lead.

The Jaguars came back with a 62-yard pass play and successful conversion kick, and the score stood 14-7, Mules' favor, at halftime.

After a scoreless third quarter, the Jaguars tied the score on a 14-yard pass play early in the fourth quarter. They followed with another touchdown on a one-yard run for a 21-14 lead.

The Mules bounced back, with Quentin Nelson returning the kickoff 91 yards for a touchdown. The conversion kick failed, leaving the Jaguars ahead 21-20.

The Mules took the lead with 1:09 left in the fourth quarter on a 55-yard pass play from Brown to Johns. Brown passed to Nelson for the conversion and a 28-21 Mule lead.

The Jaguars tied the game with 26 seconds left on a 29-yard pass play and successful conversion kick. Regulation time expired with a 28-28 tied game.

In overtime, the Jaguars scored on a quarterback draw, and then a defender intercepted a Mule pass to secure their 35-28 victory.

The Mules' effort filled their coaches with pride.

"Sad but satisfied," head coach Eric Hansen said of the season. "It was a roller coaster of a season, with injuries and people quitting. But the last three weeks, they really focused, and it was fun.

"The kids went out, played hard, and gave it their all." 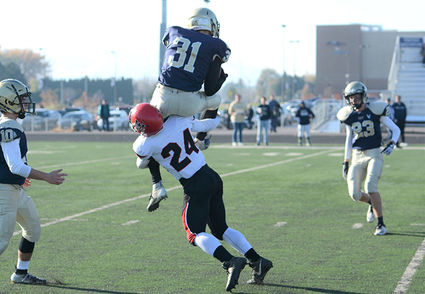 Brown completed 12 of 24 passes for 170 yards and three touchdowns; he was intercepted twice. Johns caught four passes for 71 yards and two touchdowns; Nelson caught two for 31 yards; Leitz two for 28 yards; Berry one for 16 yards and a touchdown; Leitz one for no yards gained, and Chance Cothren caught a 21-yard pass on the first play of the game and had to leave because of an ankle injury sustained on the play.

Defensively, Ashden Niemeyer had 11 tackles and intercepted a Jaguar pass. Brown was in on 10 tackles and recovered two fumbles. Nelson had nine tackles, Evan Quigley seven, Zayne Meneou four, Damion Curl and Gabe Moon three each, Eli Moon, Beery and Chase Heagy two each, and Johns and Jason Hodges one each.

The Mules finished the season with a 5-6 record. Team seniors are Brown, Nelson, and Quigley.