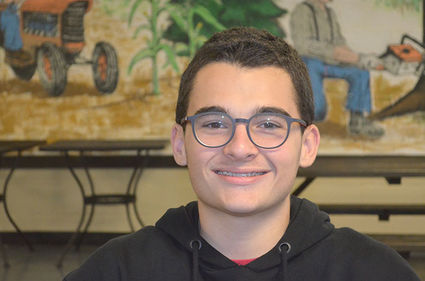 Daniel Lopéz is a 17 year old exchange student. Originally from Caracas, his family moved to Spain to escape the turmoil in Venezuela.

Lopéz was born in Caracas, Venezuela, but thanks to dual nationality, was able to move to Spain nearly four years ago, not long after Nicolás Maduro became president of Venezuela.

"It's pretty much a curfew at home most of the day," Lopéz said of living in Venezuela. "It's school/home, school/home. Even if you wanted to go to your friend's house a block away, you had to get your parents to drive you there."

"It was getting worse," Lopéz said. "There were a lot of protests that turned to riots. It was very hectic. The thing that permeated living in Venezuela was insecurity, you never felt safe anywhere at home. Even a little kid like me and my little brother noticed it. People were stressed out all the time. You didn't know if you were going to be robbed or killed if you went out."

"A dollar, according to their standards, you can get a dollar in exchange for like 12 or 13 bolívares," Lopéz said, "the actual price of dollars was like 50,000 bolívares for a single dollar. They were forcing stores to sell things at the exchange rate that they had. So they would sell a can of Coke for 13 bolívares when it was actually worth 50,000. So every business was working at a loss. That led to food shortages. You had to go around the city to find a sack of flour or bread. It was very bad. Our parents tried to keep us away from that as much as they could. It was getting bad when we left, it's even worse now."

Life in Spain is much calmer. He and his family moved to A Coruña, a town in northern Spain, just above Portugal. In A Coruña, 300,000 people inhabit six square miles. His dad owned a recycling company in Caracas, and his mom worked in a bank. They've had to make some adjustments. Dad is currently unemployed and mom works in a hardware store, but they and their boys are safe.

"You can walk anywhere, everything is close together," Lopéz said. "It's an old city. You can see the old military fort and the cannons. It used to be a military encampment back in the 1600s, then a fishing town, and now it's more of a port city. It has a big port."

"At first it was hard to even go out into the street, because I was not used to walking everywhere," Lopéz said. "I was looking behind my back every once in awhile. Those habits eventually faded. It's so much more comfortable. I walk to school every day. I don't have to have a 20 minute car ride to school. I can hang out with my friends whenever I want. I can simply go to the supermarket if I feel hungry. I'm not trapped at home. The only place I knew in Venezuela was home and when I went out with my family to some enclosed space."

Lopéz is pleased to be in Cathlamet.

"It's very good here," he said. "It's so calm. It's even calmer than Spain. I definitely like it. I like seeing the river. It's not what I'm used to. I'm used to an urban environment, it's a refreshing change."

The weather reminds him of home, but Venezuela is a different story. It's "very, very hot."

Lopéz loves sports, and was looking forward to participating in football and wrestling while here. He broke his wrist during the first day of football practice, had to have surgery, and is still wearing a cast. So no football and no wrestling.

Mr. Cox is his favorite teacher.

"I like his style of giving class," Lopéz said. "It's a lot of talking and a lot of work. I have American History through literature. It's very interesting. It's reading a lot of books, but I like that."

He loves to play video games and reading, and at home, he goes to the gym and plays soccer.

The exchange program "was a good opportunity to learn how people lived, outside my box. I wanted to live outside my box, be more independent for a year or two. And hone my English abilities."

Lopéz is the son of Benigno Rosua and Ana Gloria Lopéz. His little brother, Diego, is 13.

He is staying with John and Nova Lee Knopp.

"People in Wahkiakum County have been very nice, so far. Keep it up," Lopéz grinned.