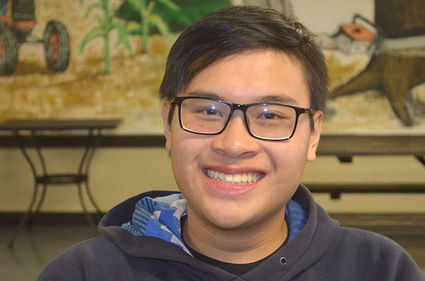 Vo Khac Minh Dai is a 16 year old exchange student from Vietnam. Novelty is the spice of life for this bubbly young man, who is learning to weld and play football and baseball at Wahkiakum High School.

Vo Dai, 16, is an exchange student and a junior at Wahkiakum High School this year.

Dai is from Ho Chi Minh City, once known as Saigon, the biggest city in Vietnam.

"We only have two seasons," Dai said. "Hot season and hotter season. Our country has a tropical climate. It's hot all the time. When it rains, it's hot too. After the rain, the sun makes the water in the street smoky. It's so uncomfortable."

Suffice it to say, Dai has been a little cold in the last few weeks as the temperatures have dipped down in to the 40s and even the 30s.

But no matter, if it leads to snow. Dai wants to see some of the fluffy stuff before he leaves.

His favorite teacher is Mr. Thomas, who is teaching World History.

"He's so cool," Dai said. "He used to be in the Army. He taught us how to make fire and weave baskets. I love it. I love nature. I like knowing if anything happens, I could survive."

Even though he's just 16, Dai already has some pretty good ideas about how to live.

"If you picked the thing you already did before, it's not any fun any more," he said. "Try anything new. I've got 10 months here so why not?"

Why not? He applied for an exchange program and came to a little town in southwest Washington. And he turned out for football.

"The team is surprised about me," Dai said."I'd never played before, but when I practice or go to games, I always try to give my best effort. The coaches are so nice and the team has just helped me. It's tough, cause it's hard. I'd never seen a sport like this before."

Spring season may have similar motivations. Track and field? It's all been done before. But this boy from Vietnam has never played baseball.

"It may be a good experience," Dai said. "Our school is small. I almost know everybody, it's not hard to make friends or ask for help."

He has turned out for basketball, but he plays a bit of that at home, as well as soccer, swimming, and badminton. He also studies karate for defense.

He's taking advantage of a class in welding in his bid for uncharted territory, and is enjoying the FFA Club.

"I just want to go out and do everything I can," Dai said.

After his 10 month exchange in Cathlamet is over, Dai hopes to be able to return to the US and finish high school and college, where he plans to study business administration. He already has family in California.

He could have stayed with them, but he wanted this year for himself.

"If you come straight to family's housing, it's not fun," Dai said. "I wanted to know more about American culture, and how people live here, and how the public high school works here. I wanted to know all this stuff, by myself. It's my first step to study by my own self, and take care of my own business."

His mom was a little bit hesitant to let him go, but the rest of his family has been very supportive, including an older brother who is studying at an international school.

"He speaks English so good," Dai said. "I'm practicing to be as good as him."

Eventually Dai plans to return to Vietnam and help his uncle with the family's cosmetic company.

But he has his own dreams too. He wants to be a streamer, a maker of youtube videos.

"I want to make funny stuff about games or make videos about going out and eating food," Dai said.

Wahkiakum County is a great place, according to Dai.

"I usually live in a big city, and everything is a big rush," he said. "But here, the thing I love most is the peaceful atmosphere. And people are so nice. The way they say hi in the morning even if you don't know each other. It amazes me, because it doesn't happen in Vietnam. If you know them for a long time, it's different, but if you don't know each other, they aren't going to say hi. It's too crowded in the street. They don't even see you."

"Everything is so good, so perfect," Dai said. "I'm having fun!"

Dai is the son of Vo Khac De and Huynh Thu Hue. His host family is John and Nova Lee Knopp of Cathlamet.