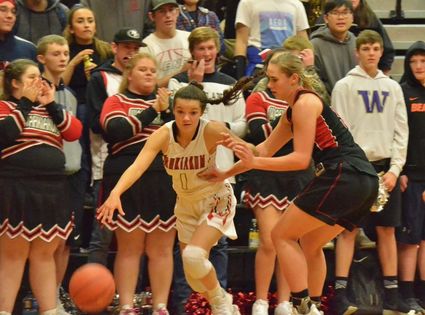 Senior Mckensi Fluckiger took advantage of an open baseline and headed towards the basket for the Lady Mules.

With five seniors on the roster, the Wahkiakum Mules girls basketball team seemed to pick up right where they left off last year, beating Clatskanie 69-54 in a non-league game on Monday.

"I thought over all it was a great first game for us," Coach Rob Garrett said. "We started off a little bit sloppy for sure, but by the time the second quarter came around I thought we started to play our type of basketball. I'm really happy with our effort. They worked super hard and really attacked the rebounds."

"I told them before the game, 'Some of you are going to have a great night, some of you are going to have an off night. Regardless, you should still be working as hard as you can on every possession, doing rebounding, setting good screens, making a good pass,'" he added. "I thought they really did a good job of that. They continued to work hard, continued to play hard even if they were having an off night."

"Macie (Elliott) and Ellie (Leitz) had phenomenal games," Garrett said. "Macie saw the floor extremely well and gave her teammates open looks all night long. Ellie played a great game inside. It's just the beginning for her. She's going to have a phenomenal year."

Garrett was complimentary of the Clatskanie team, praising their two sophomores. 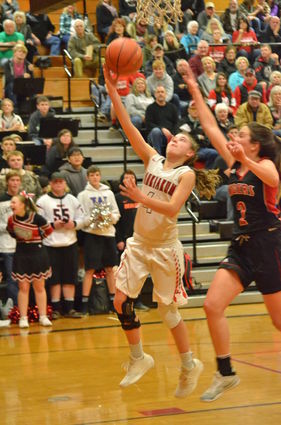 Paige Mace scored two on a fast break in the Lady Mules 69-54 win against Clatskanie.

"It was a good early test for us," Garrett said. "I'm really happy they could come. We're returning the favor and matching up again next year at their place."

The team traveled to Mossyrock on Wednesday. The score was not available by press time but will be posted on The Wahkiakum Eagle Sports Report page on Facebook.

The Lady Mules have two more games this week, hosting Toledo on Friday and Napavine on Saturday. JV games will begin at 5:45, and varsity will follow at 7 p.m.