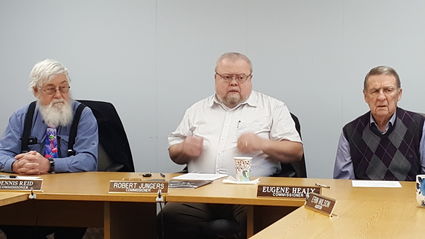 The Wahkiakum County PUD Board of Commissioners rotate the chair and vice-chair position each year. This year Bob Jungers (center) will be acting as chair and Dennis Reid (left) as vice-chair. Gene Healy (right) was chair in 2018.

The Wahkiakum County PUD Board of Commissioners approved a resolution to request membership in the Cowlitz-Wahkiakum Council of Governments and listened to reports from the general manager and auditor at their first meeting of the new year last Wednesday.

General Manager Dave Tramblie reported that the PUD took advantage of some recent foggy, cold weather to pull out a rarely used infrared camera to inspect substations at both ends of the county as well as their main feeders. They found no issues.

Thanks to the sharp eye of Jim Jespersen, who leads the water crew, a problem in the Western Wahkiakum Water System was discovered and handled quickly.

"The computer system gauges drop down level time at Salmon Creek reservoir," Tramblie said. "Jim keeps a close eye on it. As drop down time increases, the pumping time accelerates."

The clue led to a leak being discovered in a Deep River pumping station.

"The bolts at the valve completely rusted out," Tramblie said, noting that it had only been there for about 15 years.

Tramblie shared an update from the vendor supplying the Grays River substation transformer for their project planned for later this year. The specifications for the transformer should be available to the PUD by January 11, including weight, which will help them determine if they need to replace the existing concrete pad. The transformer is expected to be delivered in August.

"I think we're going to be in good shape," Tramblie said.

Reserves are in better shape, according to Tramblie, which he attributed to three decisions.

One, the PUD has been doing their own tree trimming instead of hiring a contractor. They completed work along the highway from Miller Point Road to Fairview Road and are planning to do some work in the Skamokawa area this month. In February and March, the PUD will be trimming trees in the Cathlamet area and on the east side of the county.

Two, they decided not to replace their backhoe.

"We use it so seldom," Tramblie said. "I think we're going to have it serviced. It doesn't run as well as it used to, but I think maybe for $2,000 we can get it up to snuff and buy us a lot more time."

Finally, Tramblie said, they decided to purchase electric AMR meters at the same time they planned to install water AMR meters on the Westend.

"It doesn't really do us any good to have electric without the water," Tramblie said.

In the meantime, he did purchase 100 electric AMR meters to be installed in areas in the Westend that don't have water. Those meters are expected to be delivered in February.