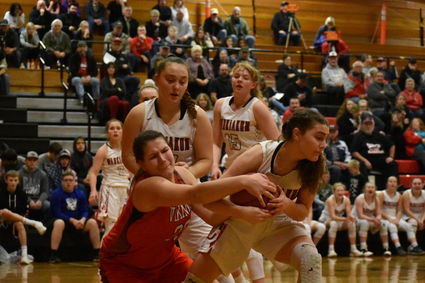 Macie Elliott fought a Viking for a loose ball in the Lady Mules' 76-22 win against Mossyrock on Tuesday.

The Wahkiakum Mules girls basketball team won two more games this week to bring their record to 6-0 in league, 15-1 overall.

On Thursday, the Lady Mules beat the Napavine Tigers 63-19.

"It was a good game," Coach Rob Garrett said. "I thought the defense was awesome in the first half, especially holding them to three points. The scoring was really balanced and almost everyone got involved."

On Tuesday, Wahkiakum beat Mossyrock in a quick four quarters, 76-22. 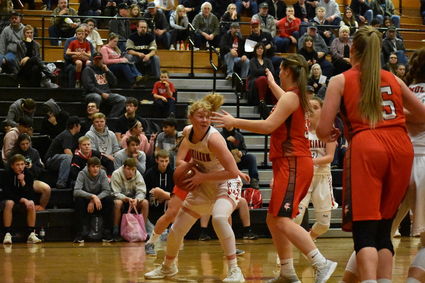 Ellie Leitz looks for the move. She had 12 points and nine rebounds to finish the game.

"Overall I was really impressed with all four of our guards having five plus assists," Coach Garrett said. "I thought the defense worked really hard and figured out the rotation better and better as the game went on. Jansi (Merz) finished extremely well around the hoop which was really nice to see. And Macie (Elliott) and Charlie (Ashe) both shot 50 percent from the three point line, which is great!"

Wahkiakum travels to Toledo today (Thursday), Onalaska on Saturday, and Adna on Monday, before their final home game of the regular season next Wednesday.