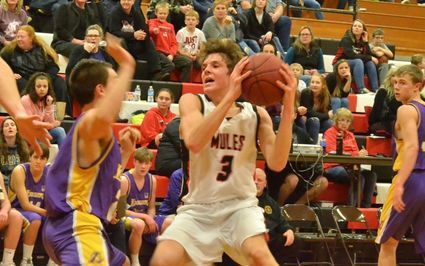 Sophomore Jake Leitz tries to brush off an Onalaska defender in the Mules' 62-52 victory last week.

The Wahkiakum Mules boys basketball team won three games this week and secured sixth place in the Central 2B league.

"I thought the guys stepped up to the challenge and met the goal of a minimum of five rebounds each and most important, limiting the bigger Loggers to seven offensive rebounds," Coach Todd Souvenir said. "Both Logan (LaBerge) and Brody (Carlson) stepped up in the fourth quarter making some clutch shots scoring 17 of our 23 points in the quarter. Luke (Brown) and Quentin (Nelson) led the charge with eight and seven rebounds."

On Friday, the team traveled to Morton/White Pass and won 43-41.

"MWP plays very good physical defense but our guys stepped up and played just as well and limited them to 41 points and held Rashoff to nine," Coach Souvenir said. "The game was close from beginning to end but with 3:40 left, the Timberwolves took a seven point lead after hitting a three from the corner. We got a couple steals off our full court press and made them take tough shots to end the game. Quentin drew an offensive foul after making two clutch free throws to tie the game with 40 seconds left. On the offensive end, Luke had a great quarter scoring 10 of his 19 points and hitting the game winner off an assist from Logan with 25 seconds left. After a timeout we wanted to foul if the clock went below seven seconds. Brody made a great read and went to double and got the steal to secure the win. We outscored them 11-2 in the final 3:40."

"I was very happy for the guys to get a win on the road in that atmosphere with what was on the line," Coach Souvenir added. "I was very proud of how they responded when we fell behind late in the game."

The Mules traveled to Mossyrock and beat the Vikings 69-27 on Tuesday. 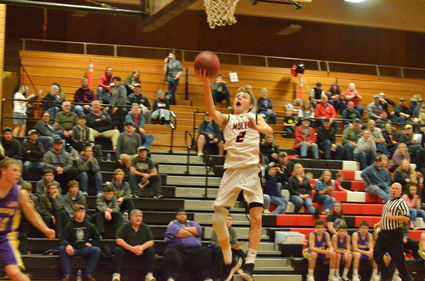 "We struggled to score tonight and lacked energy in the first half, scoring only 19, but we managed to hold them to 18," Coach Souvenir said. "In the second half, we came out and got to the rim and made some easy buckets which allowed us to get our defense set and then we played with some passion and energy to close out the game, scoring 50 points in the second half. Overall it was a win and the guys had fun and we were able to continue the positive momentum going into our district game."

District play begins at home on Tuesday at 7 p.m. when the Mules take on the seventh place team in the Pacific 2B League. Souvenir said seventh place may be determined by a game between Chief Leschi and North Beach this week.