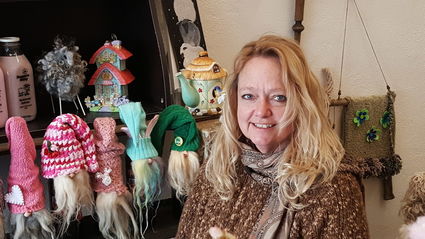 Skamokawa resident Angie Whitehead has opened a new shop on Main Street in Cathlamet full of lovely handmade and re-purposed decorative pieces. The shop is called Re-Imagine by Angie and is next door to The Wahkiakum County Eagle newspaper office.

Angie Whitehead has opened a little shop on Main Street in Cathlamet, where she sells lovely and fun handmade decorative items.

Whitehead and her two sisters, Daria and Donna, have filled the shop with their creations, handmade and re-purposed from items they find at auctions and thrift shops.

"I think mom had a master degree in home economics," Whitehead said, "she did costuming for a theatre in Portland. This kind of creativity was always around. My oldest sister does all the sewing, she's a perfectionist, but she does nothing crafty. My other sister is extremely detailed. She did all the dolls. I'm more crafty, I see visions and turn them into things."

The three grew up in Battle Ground, and Whitehead returned to the northwest after 22 years in Arizona. She was looking for a quieter life. Working as a project coordinator in construction meant long hours spent away from her two boys. These days she has more time for them and her creative endeavors.

The 4-H arts and crafts have always been a part of Whitehead's life, as a youth and as a leader, and she's hoping to get involved locally. She's also thinking about offering classes at the shop this summer, teaching people to felt or make quilt pillows.

The shop is open during the week, though Angie and Daria like to go to a weekly auction in Woodland on Thursdays to look for inspiration and pieces that can be re-purposed.

Working at bazaars or in the shop is always a learning experience and can be entertaining. Whitehead loves to hear people respond to her creations.

"One woman was looking at my painting of sheep hanging mistletoe," Whitehead said. "You must have sheep, she told me, because only a person who has sheep would know how hard they work together to get into something they have no business getting into."

Whitehead laughed. The sheep were hanging the mistletoe, but the woman thought they were trying to get into it. The conversation inspired Whitehead to paint another, this time with goats, climbing on each other's backs to get some apples.

She likes to make gnomes. They are really big sellers, but sometimes it's all in the marketing.