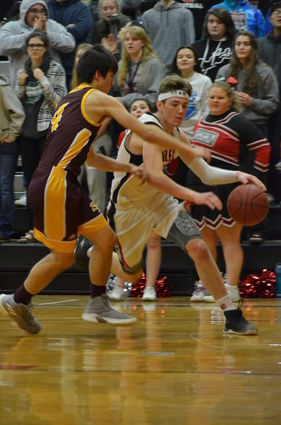 Last week, a fight broke out in the second quarter of a game that would decide seventh place for the Pacific League. It was a season ender for the two teams involved in the incident, North Beach and Chief Leschi; both were disqualified. The ninth place South Bend team moved into seventh place and into the district bracket against the Wahkiakum Mules.

And on Tuesday, the Wahkiakum Mules boys beat South Bend 65-49 at home in the first round of the district tournament. 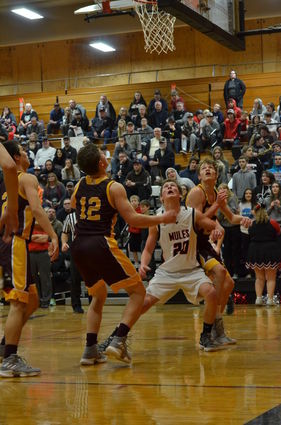 Senior Evan Quigley waited for the rebound in the Mules' 65-49 district win against South Bend on Tuesday.

"Luke (Brown) carried us in the first quarter hitting his first five shots and scoring 11 of his 20 points, but we trailed 16 to 15," Coach Todd Souvenir said. "In the second quarter, Quentin (Nelson) got us going with his defensive energy. He scored seven of his 12 and we were able to hold them to six in the quarter to take a nine point lead into the half. In the third, we played with some confidence on offense, and when they tried to box and one Luke, we were able to get threes from Jake (Leitz), Logan (LaBerge), and Brody (Carlson), along with one from Luke to extend the lead to 24 at the end of three quarters. I thought Evan (Quigley) really gave us a spark tonight on both ends of the floor."

The Mules travel to Rochester tonight (Thursday) to face Willapa Valley at 6 p.m.

"Willapa Valley is a very good team that can play inside and out and get after it on the glass," Coach Souvenir said. "We will need to limit our turnovers and continue to improve on the boards. If we do those things I think we can play with anyone."