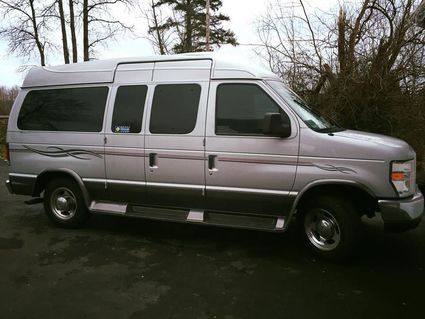 When Grant Turner goes out with his friends, it takes a little planning.

Turner, who became a quadriplegic after an accident in 2015, can't drive. His friends come to him, and drive him in his own wheelchair accessible van to their agreed upon location. When it's time to go home, his caregiver will arrive at the location, drive him home in the van, and then return to get his or her own car, leaving the van at the location overnight.

He's done it for four years. It was never a problem until this particular Sunday night.

The van was left in Skamokawa at the Duck Inn and early Monday morning between the hours of 2:00-5:30 a.m., his van was stolen.

"Nobody who knows him would do that," Ashley Moore said on Tuesday evening. "We're just hoping and praying someone finds it."

Nearly six months ago, Turner got a new vehicle, and decided to keep the wheelchair accessible van as a backup.

According to Moore, they are special vehicles, the only two that fit Turner and his chair.

Just a week ago, he found out there were some issues with the new vehicle and it was going to cost $9,000 to fix. It made the loss of his second vehicle on Monday morning more than a little inconvenient.

Turner has had some medical issues recently that have him going back and forth to the doctor's office once or twice a week, according to Moore.

There has already been a huge response on Facebook. The community is on the lookout for the van, with Washington disabled plates number 51101.

"They couldn't have gotten far, there was only a quarter of a tank of gas in it," Moore said. "It's such a unique vehicle with a raised roof and disabled plates. Someone is bound to see it."

Please keep an eye out and notify the Wahkiakum County Sheriff's Office if you spot the vehicle.