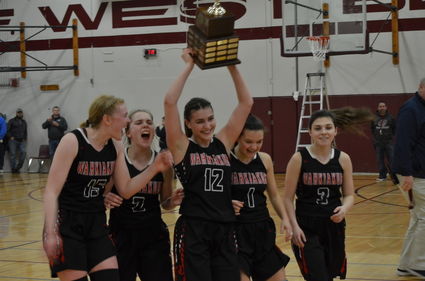 The Wahkiakum Mules girls basketball team became the 2019 District 4 2B Champions after beating Ilwaco on Saturday night, 64-51, before a huge crowd at W.F. West High School in Chehalis.

Ilwaco brought the rough, and the Lady Mules took lots of tumbles in probably one of their most physical games this year. Ilwaco's physicality kept them in the game for three quarters, but it wasn't enough in the end.

Coach Rob Garrett was in such a good mood after the game, it took him a moment to gather his thoughts.

"I don't even know," Garrett started. "It was an awesome atmosphere. Got the excitement level up. I was proud of the girls for closing down the stretch, they showed their senior leadership, and showed that they know what they are doing. Definitely a little closer than we wanted to be and we've got to be more checked in as a team across the board. And just be a little more aggressive. I wasn't really happy with our rebounding tonight, I thought that's been an area where our posts especially have really carried us. It wasn't there tonight like it has been. Kim (Watkins) stepped in and did an awesome job attacking boards. Without her we would have been in trouble. Paige (Mace) carried us in the first half. Macie (Elliott) stepped up late, Jansi (Merz) had quite a few buckets.

"I told the girls before the game somebody is going to have a bad night, but there is no doubt in my mind that two or three or four of you are going to step up every single night and that's what makes this team so special and so hard to guard."

"We got the nets for the seniors," he added happily.

On Friday at Kelso High School, Wahkiakum beat Ocosta in the semifinals, 62-35, to advance them to the championship game.

This Saturday, the Lady Mules face Rainier in a regional game at Mark Morris High School in Longview at 6 p.m. Win or lose, they are headed to the 2B state tournament in Spokane February 27-March 2. 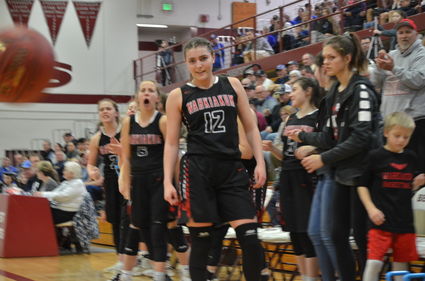 It was the fourth quarter and the Lady Mules hadn't been able to shake their opponents, who had not only pulled even during the game, but pulled ahead more than once that night. A moment before this picture was taken, senior Macie Elliott had caused an Ilwaco turnover. The Wahkiakum bench erupted behind her as the look in her eyes and her carriage suddenly seemed to transmit a certainty that the game was over for the team from Ilwaco. With that, the momentum shifted, and the Lady Mules' lead grew and grew.