Little contaminated soil said to be on town property 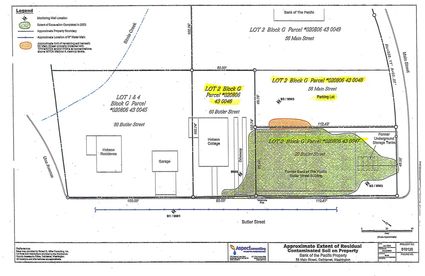 On February 13, the members of the Cathlamet Town Council held a workshop to consider a December 2018 Department of Ecology report on 58 Main Street, which belongs to Bank of the Pacific, and 20 Butler Street, which now belongs to to the town.

The lot was once the site of a gas station and auto repair business. It closed after down slope neighbors noticed gasoline coming out of the ground, indicating that an undergound storage tank was leaking. The site was later cleaned up at the direction of the state Department of Ecology. The continued presence of some subsurface contaminated soil is a point of contention in the effort to recall Mayor Dale Jacobson and three council members who voted to purchase the lot.

"There is a restrictive covenant on at least part of the property," Fred Johnson, the town attorney said. "It says it applies to 58 Main Street, the bank's property (which abuts the town's lot)."

There is about 30 cubic yards of contaminated soil, and according to a map shared by Johnson, most of it, but not all of it is on the Bank of Pacific property. The two properties are largely separated by a retaining wall.

The restrictive covenant, according to Johnson, says that the owner shall not "alter, modify, or remove the parking lot, or retaining wall in the area of residual petroleum hydrocarbon constituents...without written approval from Ecology."

"In the worst case scenario, if the town did own up to the parcel line, but given that that retaining wall is six inches thick, you can estimate that an inch of the contaminated area crosses over the parcel," Johnson said. "I guess I would perhaps give the opinion that this is probably one of the cleanest properties in Cathlamet. The pharmacy was built on a former Shell station, the fire hall on the site of a former Union station, the clinic is built on the site of a former Standard Oil station. This particular one was cleaned.

Johnson added that Department of Ecology people practically fell out of their chairs when someone suggested it would cost $15,000 for a couple monitoring tests.

The town is considering two options--to continue using it as a parking lot or to turn it into a pocket park.

Johnson has been speaking to the town engineer about the matter, and there was some discussion at the meeting about building up from the gravel by adding topsoil, sod, and picnic tables. This led to concerns about how to keep the soil from washing off the property and onto Butler Street and a further conversation about whether or not it would be possible to remove everything instead.

According to Johnson, that may yet be possible by surveying the property line.

"The Department of Ecology is okay with that," Johnson said. "They said basically move the line a foot and then the parcel would be clear, but the bank is not enthusiastic about that. The latest email from the Department of Ecology would be open to that, but we would want to rewrite the restrictive covenant, but I think the bank's fear is that they would write into that everything they forgot the first time. I think we could say, just amend the description, you don't have to rewrite the whole thing."

Johnson said he had contacted the Department of Ecology about their possible plans, but had not yet heard back.

Mayor Dale Jacobson suggested that the town council wait until a later date to consider potential plans for a park.

"I think if we can get this pinned down, we'd be in a lot better shape. Then we can have some fun planning a park," Council Member Sue Cameron said.

This is what Panjini Balaraju from the Department of Ecology had to say in an email on Tuesday:

"At the 20 Butler Street property, as part of the site cleanup, four underground storage tanks were abandoned in-place in 1999 and subsequently removed in 2003. In 2003, the building was demolished and approximately a total of 1,200 tons of petroleum contaminated soil was excavated and disposed of off-site," Balaraju wrote.

Balaraju added that in 2004, groundwater monitoring was conducted four times on the Butler Street property, and the concentration of petroleum constituents were "below the laboratory detection limits or below the Model Toxics Control Act cleanup levels."

"Approximately 30 cubic yards of petroleum contaminated soil was left in-place because of its inaccessibility next to a retaining wall," Balaraju wrote. "Ecology believes the petroleum contaminated soil is present on both the 20 Butler Street and 58 Main Street properties. As a result of not being able to excavate the inaccessible soil, a Restrictive Covenant (RC) was recorded in November 2005 with restrictions on land use."

Balaraju said the Department of Ecology presented four options for the property. Two of them allow for unrestricted redevelopment.

One is to do nothing and maintain it as is. If the town opts to do that, the restrictive covenant would stand, and the site would have to undergo reviews every five years.

Finally, according to the information from Balaraju, the town could propose property development that does not violate any terms of the restrictive covenant, subject to approval by the Department of Ecology.