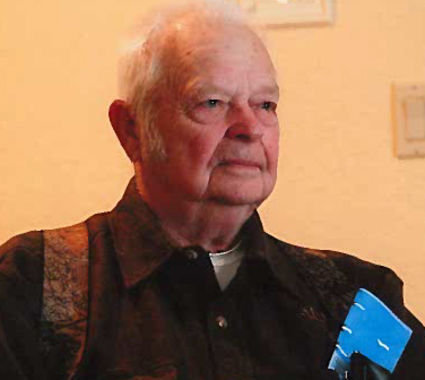 On February 24th, 2019, Howard Ray Nelson passed away peacefully in Longview, surrounded by his family. He was born January 11, 1931 to Eva Irene and Richard Nelson in GoldenTownship, Nebraska. He attended school there until the family moved to Roseburg, Oregon. At six years of age, Howard began carrying oil cans for his father who was cutting old growth timber. At 16, he then worked as a scaler. Howard continued working in the industry all of his life, first as a timber faller, then a truck driver for Crown Zellerbach. He often talked of the loads of huge trees he remembered hauling in the early years. When Crown closed, he retired, then went back to work for DeBriae Logging where he retired again at age 63 in 1994. For several more years, he drove for his son-in-law Bob, at Torppa Construction, finally retiring just a few years ago. He had no accidents in all his driving years, a record he was quite proud of. The only time he wasn't working in logging, was when he proudly served four years in the US Navy.

Howard, known also as HR, Howie, Grumpy, Papa, G-Pop, dog lover, Supervisor and Hammer Down, loved his family first and foremost. On December 11, 1965, he married Arlene Callahan and became a beloved father to her four children adding them to his own three children. They moved to Deep River in 1966.

Howard was known as a man of the outdoors. He not only worked in timber he enjoyed hunting elk and deer. He was a member of the North American Hunting Club, the CB Club, Grays River Fire Dept., and the American Legion. He loved square dancing, photography, card games, fishing, "Farmville," and loved to go to Torppa Construction's shop where he was quick to lend a hand. He was a fine mechanic, with a strong respect for tools and problem solving. He loved history and enjoyed telling stories of his early years in logging. His heart was huge and he helped all and any who asked. He was one of a kind and will be deeply missed.

Howard was preceded in death by a brother, Dewayne Nelson and a grandson, James Kimball.