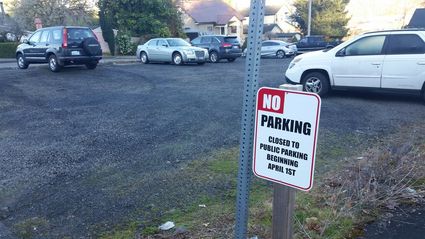 Cathlamet officials are closing this parking lot with plans to turn it into a park.

Members of the Cathlamet Town Council are ready to move forward with development of the controversial parking lot at the intersection of Main and Butler Streets.

At their monthly meeting on Monday, council members supported Mayor Dale Jacobson's moves to turn the parking lot into a small park.

Also at the meeting, council members heard a report from Sheriff Mark Howie about law enforcement activity in the town during the past two years, and the council addressed issues with the municipal library.

Last Friday, people parking cars there found a notice on their windshields stating the lot would be closed to the public effective April 1.

Jacobson said Monday it was his decision to close the lot so that the town could start developing it as a park as soon as possible. He anticipates the park will have a grass surface with trees, planter, lights and so on.

County Commissioner Mike Backman and Cathlamet resident Robert Stowe questioned the process leading to the decision to create a park on the lot and what impacts it might have.

Backman questioned the impact on parking; Jacobson responded that he has observed many empty parking spaces on Main Street.

Stowe commented that citizens haven't had a chance to comment on the park project, and when they try at council meetings, they're ignored.

"We come and ask questions and give input and you say, 'Thank you for your input,' and you don't answer," Stowe said. "We don't hear anything back."

"Because you try to use that as a forum for debate, and I won't have that," Jacobson responded.

The council moved to other business, but the issue of public comment returned later. Some suggested that public input be limited to the part of the agenda set for public comment; others suggested public comments be allowed during consideration of business items. There was no agreement.

Council members did agree to hold a workshop next Tuesday, 3 p.m., in the DeBriae Fire Hall Meeting Room to discuss park development and create a facility layout sketch.

"We do have some anxious people who want to see things done," Jacobson said. "We would really like to see things going on there soon.

Jacobson acknowledged that the town will have to have a plan that is reviewed by the Department of Ecology before construction could start.

Council Member Laurel Waller questioned the need to close the parking lot before construction was ready to start.

"It was a surprise to me when told by a citizen that the lot would be closed," said Council Member Laurel Waller. "I do hate not knowing . . .

"I would suggest that we not close the lot till we're ready to begin work. I don't think we're there yet."

"It's not a parking issue, and I think it's something that the public has to get used to," Jacobson said. "Regardless of when we do it, there will be debate."

"We can deal with the debate when we have it," Waller replied.

Waller made a motion not to close the lot to parking until work would start, but there was no second, and the motion died.

In other business, Sheriff Howie reported statistics for law enforcement activity involving the town over the past two years.

The council also voted to give the town librarian the same raise that other employees received.

They also discussed the suggestion that a library district be formed to spread library operation costs across county and town residents, but officials pointed out that it's up to county residents or officials to take the initiative to form the district.