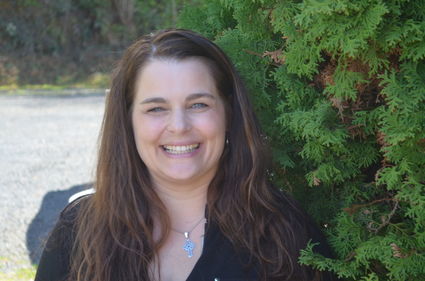 A change is coming to Main Street in Cathlamet, and with it comes a mix of emotions, certainly for Lacey Vik, and likely for everyone else involved.

For Vik, it's an exciting moment as a new business owner, but it's also tinged with sadness, because she won't be able to share this moment with the woman who got her into real estate and taught her everything she knows.

Lifelong Wahkiakum resident Kay Cochran, who established Lower Columbia Realty in 2003, died in March. The business was her baby, her pride and joy, and an invitation to friendship with all who crossed her path. When her health failed, the family decided it was time to close the realty's doors.

Vik is busy. She is the general manager for the River Mile 38 Brewery part time and is raising three boys, ages six months to 14 years, with her husband, Kevin. When the news about the office's closing came in late February, Vik had to make a quick decision, and she hasn't had much time to actually be excited about becoming a business owner, even though she thinks it's exciting. She's been too busy trying to get licensing in place.

"We are a company right now," Vik announced happily on Tuesday. "We just got active on the Northwest MLS this morning so over the next couple days we will be working on moving the listings over. I'm hoping to be open for business on Monday."

If you have spent any time with Vik, you know it's likely that Wahkiakum Realty, LLC will be open on Monday.

Vik may have just become the owner, but on Tuesday she was still working at the same desk she'd been at for the last three years. Cochran's desk sat untouched, the surface bare and clean, the emptiness screaming a roar of loss for the dynamic woman who had sat there.

Jon Keevy, who worked for Cochran, has agreed to join Vik in the new venture as the designated broker until she can take over, which she expects to be able to do in August.

"I'm so thankful to Jon that he's coming on board to help get us going," Vik said.

Cochran's granddaughter, Ashlenn Coleman, will also be joining them as a new broker.

"I'm very excited to continue to work with Ashlenn," Vik said. "I've had a lot of fun with her, showing her some of the ropes. I think it's going to be a good time, once we get through this part."

"We plan to operate with a high level of ethics and standards and client care," Vik said. "That was something Kay was very adamant about. Doing the right thing. We want to do the right things for our clients and community."

It was that standard and a great sense of fun that Vik really appreciated about Cochran.

"I firmly believe when you do the right thing for people that will pay you back," Vik said. Keep doing the right thing, keep at it. I think as long as we keep that at the core of what we are doing we'll be successful. I mean successful in building relationships and building a strong bond in the community and not just bringing in the money. That's secondary."

"Lacey learned the real estate business from my mom," Cochran's daughter Stephanie Prestegard said. "My mom loved her dearly and would be thrilled knowing she is taking a leap of faith and opening her own office."