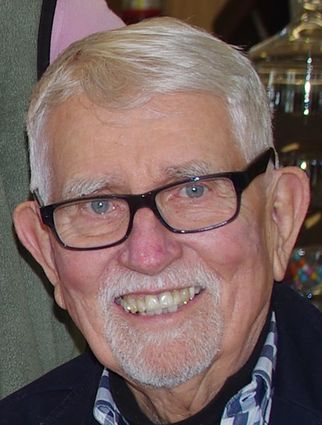 Burton Appelo, born April 11, 1927, died March 14, 2019 in Tacoma. While attending a two-room schoolhouse in Deep River, Wash., he worked in his parents' stores and the Deep River Movie House, and was President of the local Future Farmers of America. He became a sailor aboard the U.S.S. Apache in World War II. He earned a University of Washington B.A., married classmate Rosalind Swalling, and worked for the Appelo stores, winning a trip to Hawaii for selling many Crosley Shelvedor refrigerators.

In Seattle, he earned a UW M.B.A. and a Fuller Seminary M.A. His favorite books were the Bible and Heilbroner's The Worldly Philosophers. He taught urban land economics at UW and Seattle Pacific University, and served as Vice President of Western Wahkiakum Telephone Co. and as a realtor for the Bullitt family and others at Seattle's Yates, Wood & MacDonald and the State of Washington (whose Gov. Gary Locke he had hired in 1967 for Locke's college summer job as a counselor at Boy Scout Camp Omache).

He helped turn Chelan's Holden Village from an abandoned mining hamlet to a Lutheran retreat now visited by 7,000 people per year and was president and adult Sunday School teacher of Shoreline's Bethel Lutheran Church.

After Rosalind's 1979 death, he married Virginia (Ginger) Wolf Kyte, who had been widowed, and they made their home in Olympia, then Tacoma. With a prodigious memory and literary bent, he could sing the Deep River Movie House pre-show theme ("You Gotta Be a Football Hero to Get Along With the Beautiful Girls") and recite countless 19th-century poems until his dying day, often without being asked. The poem he wrote for his father C.A. Appelo's 1977 funeral could apply to his own:

Weep softly then for the fallen warrior,

With no tears of remorse or regret,

But simply of remembrance,

For he fought the good fight

And by God's grace he's in God's presence.

He is survived by his wife Ginger Appelo, his children Theresa Bakken and Steve and Tim Appelo, his grandson Trygve Bakken, and his stepchildren Kathy Brannon and Ken Kyte, and grandchildren Laurelle, Brittany, Theresa, Hillary, Chad, Courtney, Cullen, Matt and great granddaughter Daenerys.