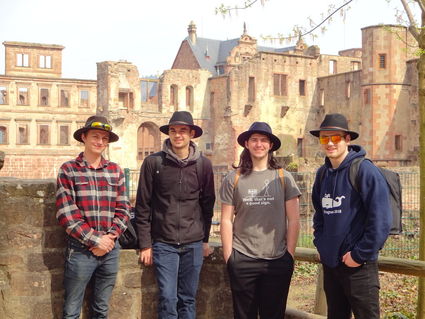 This is how memories are made.

After a year and a half of planning and fundraising, four members of the Wahkiakum High School German Club and five chaperones traveled to Germany for an adventure that will stay with them forever.

There were no plans to join a tour, and their first challenge came after they'd arrived at the Frankfurt airport and made their way to the train station. While Kuljis used language skills learned in Cox's German classes to help get sustenance for Bob Garrett, Cox found himself confused by the train system.

The group took a bullet train from Frankfurt to Freiburg in the southern part of Germany, where they had plans to stay in a hostel.

"We immediately ran into problems because the youth hostel had somehow gotten confused on the reservation arrangements," Cox said.

The adults were fine, but the reservation had gone awry for two of the students. Their hosts initially offered to put them in a room with two women. The boys might have thought that was a terrific idea, but Cox?

"I put the kibosh on that pretty quickly!"

It all went down hill from there, as they say.

The boys ended up sharing a room with a French cook named Martin, who Silva described generously as "unpleasant."

Martin was an assault on all their senses. He would turn on the light at 2 a.m. when he returned from his evening's frivolities, and he'd do it without apology. He snored loudly, coughed and sneezed throughout the night, and woke up every half hour to blow his nose. Worst of all, he was flatulent.

Thankfully, the boys had the days to take their minds off those few nights.

Using Freiburg as a base camp, they spent one day in the city, traveled to Switzerland the next, and spent their final day wandering in the Black Forest.

Another bullet train took the group of nine north to Heidelberg, where they spent another three days. They saw Heidelberg Castle, explored the city, and went to the Sinsheim technology museum.

"The boys really liked their experience at the technology museum," Cox said. "It was full of airplanes and cars and world war equipment. It was an amazing museum."

Originally, a cruise on the Neckar River was planned, but when they discovered they'd arrived before opening day, they went bowling and saw Shazam, dubbed in German, instead.

The students had to buy their own plane tickets and get a passport, and the German Club raised over $2,000 from concession sales, a big rummage sale, donations, and from the sale of pens that Cox makes himself. The money that the German Club raises pays for all the in country expenses.

Mellis and Martin each raffled off a cord of wood to help pay for their plane tickets.

"He was the only one who was able to make a girlfriend on the trip," Cox said.

The fraulein was heard telling her friend about her newest friend as they passed, "That's my boyfriend!" Then she grinned at Mellis and said "Hi Cowboy!"

The food was a hit, but the boys also enjoyed the Sinsheim technology museum and the Heidelberg Castle.

"I really liked Heidelberg Castle," Kuljis said. "It was really cool. The history was cool, how it started out so small and then expanded over time. All the different additions. You can see this facade from the 1500s and another from the 1600s and see the difference.

Kuljis's great aunt Barbara was one of the chaperones. She insists she never gets lost, but the boys are not so sure.

"We were walking home from one of our trips," Kuljis said, "and she decides to go off on her own. We chased her as she went off in the wrong direction. She goes to different countries all the time. How does she make it back from these countries she goes to? How is she making it back alive?"

Mellis was tickled watching Michael Martin chase pigeons. They have Silva to thank for Martin's antics.

"I told Michael that if he could catch a pigeon with his bare hands and bring it back to me alive before we left, I would give him 10 euro," Silva said. "If he didn't catch a pigeon he owed me five euro.

"Finally, I think even you got too embarrassed by his antics and called it off," Cox said.

"We wondered what people thought of this group walking down the street with this guy trying to catch all these pigeons," Kuljis said.

That wasn't the only thing that Michael Martin got up to. On a bridge where lovers left padlocks declaring their enduring love, Michael set about trying to pick locks. Fortunately he failed and all that love survived another day.

This is the fifth time I've done this," Cox said. "We hit the ground running. These guys were active, engaged. They wanted to experience this. On the downside, we were on a bullet train with Germany breezing by and they were looking at their phones."

The boys had a good time. They got to practice their German language skills, and they built up some confidence and hope to travel again. Two years from now, when the German Club heads overseas again, some of them would like to chaperone.