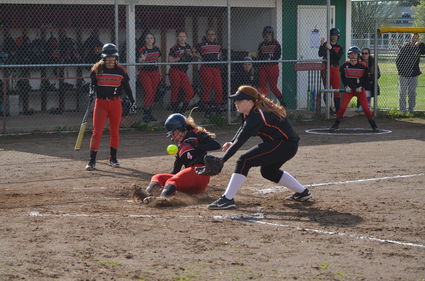 Heidi Bruntmyer steals home in the Lady Mules' 26-24 win against Kalama on Friday.

"There was lots of hitting and plays," Coach Stephanie Green said. "The girls really played well and were able to put some of our skills into action. They have been taking steps of improvement and tonight during their game they got to see their hard work in action.

"Aubrie Montgomery did the majority of the pitching and is really improving and doing well. Rebekah Neves and MJ Neves took turns catching and have really risen to the demanding position. Jordyn Watson is playing several positions and hitting the ball really well. Heidi Bruntmyer has been knocking the ball down at third and making great throws and plays. All the kids have really worked hard at learning several new positions."