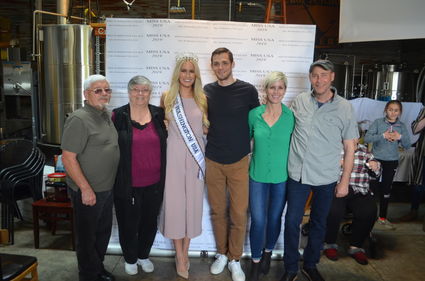 Miss Washington USA, Wahkiakum's own Evelyn Clark, was given a send off by family and friends on Sunday at the River Mile 38 Brewery. From left to right, her grandparents Hap and Dixie Anderson, Clark, her boyfriend Jason Lorentz, and mom and dad, Leah and Mike Clark. Clark will be competing in the 2019 Miss USA pageant, which will be televised on Fox on Thursday, May 2, at 8 p.m. ET.

Evelyn Clark, a Wahkiakum High School graduate, will represent Washington in the 2019 Miss USA pageant which will air live on Fox on May 2 at 8 p.m. EDST.

Family, as well as new friends and old, gave Clark a send off at the River Mile 38 Brewery on Sunday. Clark was excited about the next step in her adventure: traveling to Reno on April 21 to join the other contestants and begin rehearsing for the big show. She had a lot to do this week, but one of her most pressing concerns was what to pack. Contestants had not yet learned the schedule for the pageant preliminaries. The best plan so far? Take everything!

Clark is the daughter of Leah and Mike Clark of Puget Island.