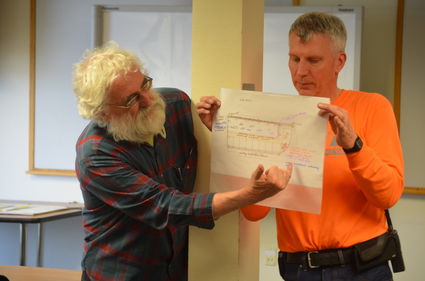 Last Friday, the Town of Cathlamet hosted a space planning session to allow the public an opportunity to get involved in the design of a lot on Butler street.

The meeting began with one attendee wondering when the residents of the town would get an opportunity to have a say on whether the space would remain a parking lot or become a park.

She doesn't get to vote on that, but on Friday, she got a chance to give input on one possible design for the community space when attendees broke up into groups.

Brice Wozniak, who works for Elochoman Valley Partners, led the session for the town council.

Everyone was given sticky notes and encourage to write ideas for the space on them when they arrived. Town Councilmember Sue Cameron collected them and gave them to Wozniak who read them aloud.

Several of the sticky notes made reference to parking, but some of them moved beyond that, embracing the idea of a park.

Afterwards, Wozniak broke the participants up into five groups, encouraging people with similar ideas to work together, from very minimal ideas to more elaborate designs.

The simplest design was a parking lot. Some other groups made room for parking and green space, art, panels denoting local history, kiosks, bike racks, a raised stage, seating, an electric skateboard charging station, and an area for dogs.

One idea quickly became popular, a wifi node, which would allow visitors access to a lot of information about the community.

"Each idea has some really exciting stuff that can be used. I think it's great," Town Councilmember Laurel Waller said.

"I came, and I suspect some of the others came, convinced that if it wasn't going to be a parking lot it was just going to be a huge waste of money and that the council was going to steal from us, and what has grown out of that is that we can all work together and we can share ideas and get what we want as well as everyone else gets what they want," Lynette Wright said. "However it turns out, if it continues to work cooperatively like this, it will be a great advantage to the whole community."

People will have another opportunity to participate in a space planning session this Friday at 4 p.m. in the River Street meeting room.