Council to proceed with project 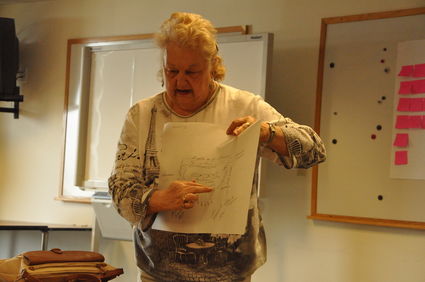 New Cathlamet resident Phyllis Wesley explains her concepts for developing a park on the town's vacant Butler Street lot. The town council has held two meetings to gather the public's ideas for developing a small park; the council will next look at the ideas and develop a budget to create the park.

After gathering a few new ideas from citizens last Friday afternoon, members of the Cathlamet Town Council will proceed with planning the layout of a park at the former Butler Street parking lot.

The meeting was the second the council has held to gather input and ideas from the public for developing the park; attendance neared 12 persons, including three council members and facilitator Brice Wozniak

The meeting opened with Mayor Dale Jacobson describing his previous experience as mayor of Long Beach; The council there made an unpopular decision to turn small city-owned parking lots into "pocket parks;" businesses owners were initially unhappy but came to appreciate the parks because tourists enjoyed them, and business increased.

Jacobson also commented that the parking lot was never a "public" lot, for it was private property which a private citizen allowed people to use at their own risk.

After making his introductory remarks, he left the meeting.

Wozniak asked participants to write their highest priorities on sticky notes. When grouped and tallied by theme, six favored amenities such as seating and an information kiosk, five favored parking, three mentioned restrooms and walkways, and two art and historical displays. Other comments suggested making a low maintenance, safe and secure area.

The group discussed some of the suggestions, and the issue of parking dominated the discussion.

Ursula Petralia favored offering parking, saying she has observed a lack of parking at certain times.

Council Member Jean Burnham said that in her observation, adequate parking along Main Street isn't a problem. There is plenty of parking close by on River and Division streets, she added.

"I know that there are people who feel they are entitled to park in front of the grocery store every time they go shopping, but I don't think that's realistic," Burnham said. "But to accommodate folks who want to stop at this spot, we do need a few parking spaces."

Council Member Laura Waller differed, saying parking needs to be considered. There are times when parking is tight.

"From a more strategic view, there's a need to re-energize the town and, hopefully, get more people, more visitors, more residents," Waller said. "So if you see that in the future, those people are going to have cars, too."

Burnham objected, saying she feels Waller has a conflict of interest because clients of Waller's hotel business need parking.

"Well, that would be sufficient reason to have parking," Waller responded.

"I want to get back to designing the park," she said. "Let's say there are mixed impressions about parking."

Phyllis Wesley said she is a new resident of Cathlamet, and in her previous residence in an Arizona city, small parks had become havens for homeless people. She asked how that would be addressed in Cathlamet.

Town ordinances provide that parks are closed from dusk to dawn, Waller said.

"Is it going to be secured and patrolled," Wesley asked. She added that she had seen two people busking in front of the grocery store. That activity, if uncontrolled, can develop into a different element, she said.

"That's probably a conversation we should have about that topic," Waller said. "That probably should be addressed as its own topic."

The group split into two groups. In each group, people expressed ideas and drew rough designs on paper to show facilities and layout. 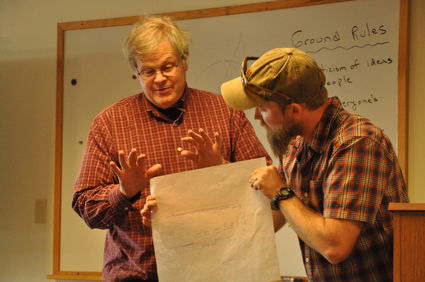 Each group included parking in their designs; some kept access to the lot as it exists; Wesley suggested having parking spaces along Butler Street, leaving more room for amenities in the lot.

Suggested amenities included a boardwalk with displays of town history, covered tables and seating, public restrooms, a hedge to screen the park from an adjacent residence, a rack for bicycles, an information kiosk, space for vendors to set up for weekend markets, a gazebo, and a wifi hub. Persons commented that the facilities should be ADA accessible.

Council Member Sue Cameron thanked people for participating. The information and input will be collected and transcribed for a report to the council which will work through them and develop a budget.

"We've got the ideas, and that's the first step," she said.